The physics programme at the PS and SPS: CERN's unique scientific breadth

While the main focus over the past years has shifted towards flagship experiments at colliders, a rich and exciting physics programme is carried out at the CERN Proton-Synchrotron (PS) and Super-Proton-Synchrotron (SPS), attracting large scientific communities from the various fields of physics.

In my talk I will introduce the CERN PS and SPS accelerators which are successfully and efficiently operating since many years and which are providing a wide range of different particle beams. This beams with energies up to 450GeV are used in various experimental facilities like the Antiproton Decelerator, the Neutron Time-of-Flight facility, the PS and SPS experimental areas and at the CNGS beamline which provides a beam of high-energy neutrinos to the Gran Sasso laboratory about 730km away from CERN.

I will present an overview on the physics programme of CERNs "lower energy" accelerators and will report on its experiments. As the PS and SPS also serve as injectors for the Large Hadron Collider LHC, I will review their operation modes and possible injector upgrades which will ensure to keep CERN's unique scientific breadth and that the experiments at the PS and SPS will remain an important and indispensable part of the laboratories activities. 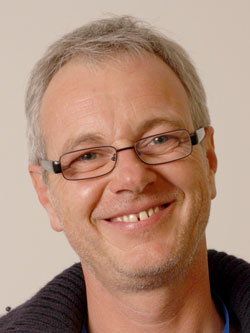 Christoph Rembser had his first high-energy experience as a CERN summer student in 1989. Since then he has worked on the ZEUS and OPAL experiments, gaining expertise in various types of detectors and searching for new physics phenomena.

After a short intermezzo in 2004 as a professor at the University of Erlangen, teaching about experimental techniques and learning about astroparticle physics, he returned to CERN in 2005.

Christoph is convinced that he will see new particles in the ATLAS Transition Radiation Tracker which he helped design and build and which he is happy to see in operation.

For three years, 2005 until 2007, he served as physics coordinator for the CERN PS and SPS programme. Since 2010 he acts as scientific secretary of the SPS and PS experiments Committee.