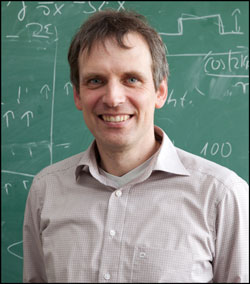 Abstract: In chiral magnets and small magnetic fields lattices of magnetic whirls, so-called skyrmions, can be stabilized. These skyrmions can be manipulated by electric currents which are 5-6 orders of magnitude smaller than conventionally needed for the manipulation of magnetic structures. The very efficient coupling of the magnetic structure to currents is governed by Berry phases, which can be described by effective "emergent" electromagnetic fields. The topological quantization of the the skyrmions thereby leads to a quantization of the emergent magnetic flux. A change of topology has to occur by singular magnetic configurations [3] which act as sources and sinks of the emergent magnetic flux. Thereby they can be viewed as emergent magnetic monopols.