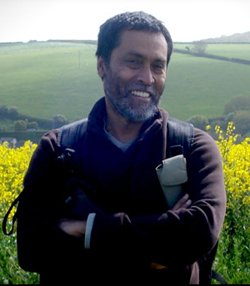 Abstract: We have just celebrated the centenary of the finding that the Earth is being constantly bombarded by high energy `cosmic rays' from space. This initiated a glorious era of discovery of many new particles (positron, muon, pion, ...) and developed into accelerator-based research into high energy physics. A century later this has given us the triumphant `Standard Model' of particle physics which provides a precise quantum description of all fundamental processes in terrestrial laboratories, including (with the recent discovery of "a Higgs boson") an understanding of how particles acquire mass.

Unfortunately the Standard Model does not explain any of the salient features of the universe as a whole - Why there is matter but no antimatter? Why there is so much more `dark matter' of unknown origin? Why is the expansion rate apparently accelerating, as if driven by a Cosmological Constant-like, dominant component of `dark energy'?

In this lecture I will describe how new kinds of experiments and theoretical developments at the rapidly growing interface of astro-particle physics are attempting to answer these cosmic questions, by linking them to possible new physics that lies beyond the Standard Model.