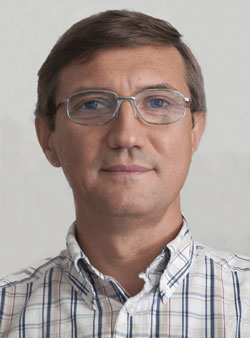 Abstract: By analogy with the probability distribution of energy in statistical physics, I argue that the probability distribution of money in a closed economic system should follow the exponential Boltzmann-Gibbs law.  Analysis of the empirical data shows that income distribution in the USA has a well-defined two-class structure.  The majority of the population (about 97%) belongs to the lower class characterized by the exponential ("thermal") distribution.  The upper class (about 3% of the population) is characterized by the Pareto power-law ("superthermal") distribution, and its share of the total income expands and contracts dramatically during bubbles and busts in financial markets.  The probability distribution of energy consumption per capita around the world also follows the exponential Boltzmann-Gibbs law, which is consistent with entropy maximization.  For more information, see http://physics.umd.edu/~yakovenk/econophysics/, Reviews of Modern Physics 81, 1703 (2009), New Journal of Physics 12, 075032 (2010).  This work is currently supported by the Institute for New Economic Thinking.

Bio: Victor Yakovenko received a Ph.D. from the Landau Institute for Theoretical Physics in Moscow in 1987.  In 1991-1993, he was a postdoc at Rutgers University.  In 1993, he became a faculty member at the University of Maryland, where he is a full professor now.  His research primarily focuses on theory of unconventional superconductors, such as organic, cuprates, and ruthenates.  In 2001-2004, he did pioneering work on Majorana fermions in superconductors and the fractional Josephson effect, which are actively investigated today.  In 2000, he also started working in the new interdisciplinary field of "econophysics", which applies methods of statistical physics to economics and finance.  Victor is strongly interested in renewable energy and has solar panels on his home, which generate almost 100% of the annual electricity consumption.  For more information, see http://physics.umd.edu/~yakovenk/