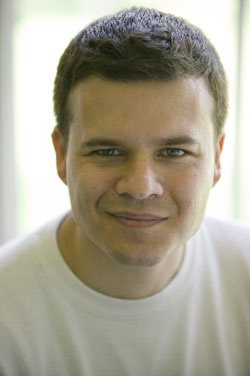 Abstract: Over the past decade, the physics of low dimensional electronic systems has been revolutionized by the discovery of materials with very unusual electronic properties where the behavior of the electrons is governed by the Dirac equation. Among these, graphene has taken center stage due to its ultrarelativistic-like electron dynamics and its potential applications in nanotechnology. Moreover, recent advances in the design and nanofabrication of heterostructures based on van der Waals materials have enabled a new generation of quantum electronic transport experiments in graphene.

In this talk I will describe our recent experiments exploring electron-electron interaction driven quantum phenomena in ultra-high quality graphene-based van der Waals heterostructures. In particular I will show two novel realizations of a symmetry-protected topological insulator state, specifically a quantum spin Hall state, characterized by an insulating bulk and conducting counterpropagating spin-polarized states at the system edges. Our experiments establish graphene-based heterostructures as highly tunable systems to study topological properties of condensed matter systems in the regime of strong e-e interactions and I will end my talk with an outlook of some of the exciting directions in the field.

Professor Jarillo-Herrero's research interests lie in the area of experimental condensed matter physics, in particular quantum electronic transport and optoelectronics in novel two-dimensional materials, such as graphene and topological insulators.

Pablo Jarillo-Herrero joined MIT as an assistant professor of physics in January 2008. He received his M.Sc. in physics from the University of Valencia, Spain, in 1999. Then he spent two years at the University of California in San Diego, where he received a second M.Sc. degree before going to the Delft University of Technology in The Netherlands, where he earned his Ph.D. in 2005. After a one-year postdoc in Delft, he moved to Columbia University, where he worked as a NanoResearch Initiative Fellow. His awards include the Spanish Royal Society Young Investigator Award (2007), an NSF Career Award (2008), an Alfred P. Sloan Fellowship (2009), a David and Lucile Packard Fellowship (2009), the IUPAP Young Scientist Prize in Semiconductor Physics (2010), a DOE Early Career Award (2011), a Presidential Early Career Award for Scientists and Engineers (PECASE, 2012), an ONR Young Investigator Award (2013), and an EPiQS Moore Investigator Award by the Gordon and Betty Moore Foundation (2014).