IceCube: Opening a New Window on the Universe from the South Pole

Abstract: The IceCube project has transformed a cubic kilometer of natural Antarctic ice into a neutrino detector. The instrument detects more than 100,000 neutrinos per year in the GeV to PeV energy range. Among those, we have isolated a flux of high-energy neutrinos of cosmic origin with an energy density similar to that of high energy photons and cosmic rays in the extreme universe. We recently identified their first source: on September 22, 2017, several astronomical telescopes pinpointed a flaring galaxy powered by an active supermassive black hole, as the source of a cosmic neutrino with an energy of 290 TeV. Archival IceCube data subsequently revealed in 2014 a flare of more than a dozen neutrinos from the same direction. At a distance of 4 billion lightyears, ten times further than the nearest such sources, the first cosmic ray accelerator seems to belong to a special class of active galaxies that may be responsible for the origin of the highest energy particles in the Universe. 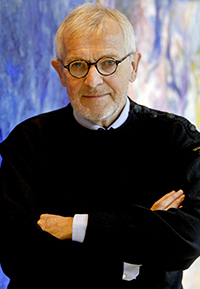 Francis Halzen is the principal investigator of the IceCube Neutrino Observatory and the Hilldale and Gregory Breit Professor at the University of Wisconsin–Madison. He completed his PhD in 1969 at the University of Leuven, Belgium. Halzen has led the IceCube project, the world’s largest neutrino detector, since its inception back in 1988. His work covers the Standard Model of particle physics and its extensions, and more recently he has investigated the interface of particle physics, astrophysics, and cosmology, with a focus on IceCube.