The Niels Bohr Institute at the University of Copenhagen, Aarhus University and DTU space are investing at total of 37 million kroner in a new telescope, which will be called the European Extremely Large Telescope, E-ELT. Denmark signed the contract today with the international research organization, the European Southern Observatory, ESO, which will be responsible for the construction of the E-ELT. 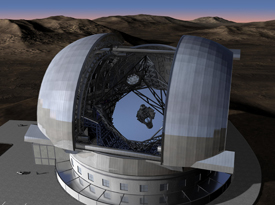 Artist impression of he 4000 tonne European Extremely Large Telescope, E-ELT, with its nearly 40-meter mirror, which will be the world’s largest telescope, when it is completed in 2023.(Credit: ESO)

The 4000 tonne European Extremely Large Telescope, E-ELT, with its nearly 40-meter mirror, will be the world’s largest telescope when it is completed in 2023 on top of the nearly three km high mountain, Cerro Armazones in northern Chile, as a part of the common European astronomical observatories, ESO.

“With the E-ELT telescope, we will be able to detect for the first time whether Earth-like planets around nearby stars are inhabited by living organisms. We will be able to see whether there is water on distant planets from the light in the atmospheric spectrum and we will be able to measure whether the atmosphere surrounding the distant planets is affected by biological activity – just like here on Earth where vegetation is responsible for the oxygen in the Earth’s atmosphere. Biological activity on a planet could be seen at a light years distance with the E-ELT telescope,” explains Uffe Gråe Jørgensen, an astrophysicist at the Niels Bohr Institute at the University of Copenhagen and a member of the ESO Council.

Advanced technology of the future

The E-ELT will be extremely advanced. The telescope will collect 15 times as much light as any existing telescope today and an advanced system of 6000 small electric motors that change the mirror’s form 1000 times a second will ensure images as sharp as if the telescope was in space. The ELT's images will be 10 times sharper than the Hubble Space Telescope’s and will be able to see so far back in time that we will come 2 times closer to the origin of the universe than the best images from the Hubble – all the way back to when we believe the universe’s first stars and galaxies were formed, just 400 million years after the Big Bang.

“The good image quality will mean that you can see individual stars in distant galaxies – not just in our own Milky Way and the very nearest galaxies, but out to entirely different cosmic environments, like the nearest large galaxy cluster, which lies 60 million light years from here, where thousands of galaxies are clumped close together and must have given the stars and galaxies a completely different evolutionary history than in our own part of the universe,” says Uffe Gråe Jørgensen, who researches exoplanets, i.e. planets orbiting other stars than the Sun.

The budget is just over one billion euros. The Ministry of Education is financing an increase in the Danish contribution to the ESO so that the Danish contribution to the E-ELT will total 65 million kroner paid over ten years. Denmark’s accession means that Danish companies will have the opportunity to bid on contracts and help to design and build the E-ELT, which will be realised with technology that is right at the forefront.