Kim Lefmann Teacher of the Year at NBI

Associate Professor of Condensed Matter Physics, Kim Lefmann receives the Jens Martin Prize as teacher of the year at the Niels Bohr Institute. He teaches experimental physics and even though it is not a mandatory course, it has gained so much popularity that it has become one of the biggest courses. This is due to Kim Lefmann’s incredible engagement. 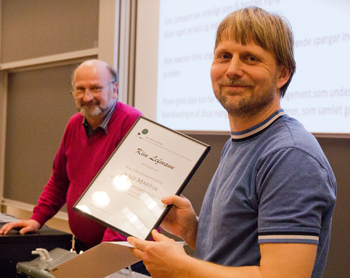 Associate Professor of Condensed Matter Physics, Kim Lefmann is the Teacher of the Year at the Niels Bohr Institute. The diploma was presented by deputy head of institute for teaching, Aksel Walløe Hansen at the annual Kick-Off event.

When the course was set up three years ago there were almost 20 students in the first class. The following year, the number had more than doubled.

In 2012, there were 59 registered and this year the number is up to 71 participants. This makes it one of the largest courses in the physics programme. The students attribute the success to Kim Lefmann’s hard work as a teacher.

“In the course Experimental Physics, you will get an introduction to all aspects of being an experimental physicists: report writing, data processing, uncertainty calculations, scientific integrity, setting up experiments, hypothesis and synthesis as well as the art of presenting you results concisely and precisely – both in writing and orally. It is a quite a bit to digest, but the elements are well coordinated, and by having an influence on the choice of a project and designing their own experiments, the students take ownership of their education and therefore have both the desire and responsibility to make an effort,” wrote students as their reasons for choosing Kim Lefmann as Teacher of the Year.

The students also point out that Kim Lefmann really understands the importance of feedback and the feeling that, as a student you are taken seriously and met with interest. However, Kim Lefmann does not do it all alone: he has created a team of assistants around him and it is precisely in light of this that the prize is being awarded: for his own contribution and engagement as a teacher, but not the least, for the coordination of these many elements and people, which combined make Experimental Physics an excellent course.

The prize as Teacher of the Year at the Niels Bohr Institute also comes with 10,000 kr.  which Kim Lefmann immediately chose to invite 5 bachelor and master students to the Nordic Physical Society meeting in Lund.