“For more than five years, Jan Thomsen has captivated class after class with waves, light, polarisers and various other optical paraphernalia as he takes students on a journey into the world of optics,” reads the justification from the students for recommending Jan Thomsen for the Niels Bohr Institute’s award for teacher of the year, the special Jens Martin Prize. 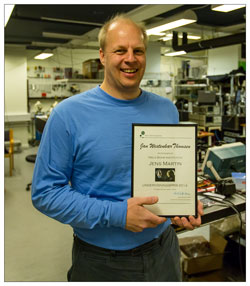 Jan Westenkær Thomsen is associate professor of quantum physics and head of the research group, Ultra Cold Atoms. Quantum physics deals with the properties of matter at the atomic level. The group works with experiments in the laboratory, where atoms are trapped in a magnetic field, are held with precise beams of laser light and cooled down to near absolute zero, minus 273 degrees Celsius. For the experiments, they use different atoms, e.g. strontium, magnesium or ytterbium, which have special quantum mechanical properties that are used for research into an atomic clock that is so precise that it only loses one second every 300 million years.

Jan Thomsen has taught several courses in recent years, but is receiving the prize for teacher of the year because of his great work with the course Optics. He has been responsible for the course since 2008. In the Optics course, students are not only introduced to optics, but also strengthen their physical understanding of wavelengths and electromagnetism. Quantum physics is difficult in many ways, but Jan Thomsen manages to make the material understandable and concrete with great enthusiasm and a good use of teaching tools, like demonstration experiments.

"I am much honored to receive the Jens Martin Prize. As a freshman, I had the pleasure of receiving lectures in Mechanics by Jens Martin. He was very inspiring and educational. Every word of his lectures were carefully measured, weighed and planned. Lecturing in Optics is actually quite appreciative because there are so many spectacular phenomena one can show that really support the more complicated part of the course: the Solution of Maxwell's Equations, which is the Holy Grail of classical Physics. It really brings the playful child up in you, and in that way we can better learn, I think", says Jan W. Thomsen.

The physics students note that Jan Thomsen is an enthusiastic communicator who genuinely cares about academic development of his students. He teaches the students how systems can be described by classical physics first, before he gives them the more ‘spooky’ quantum mechanical explanation. As something rather unique for an elective course, he has developed a series of laboratory exercises that puts into perspective and provides intuition into important elements of the curriculum and goes brilliantly with calculation exercises and lectures.

The Niels Bohr Institute’s teaching award, the Jens Martin Prize, is named after the much-cherished physicist and Mars researcher Jens Martin Knudsen, (1930-2005) who was known for his enthusiastic teaching. The prize also comes with 10,000 kr.