The Royal Danish Academy of Sciences and Letters awards a silver medal every year to a younger Danish researcher for an outstanding basic science achievement. In 2015, the silver medal goes to Associate Professor Jes K. Jørgensen from the Niels Bohr Institute and the Natural History Museum of Denmark, University of Copenhagen, for his research into the processes surrounding the formation of stars and planets. 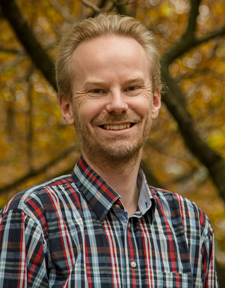 Jes Jørgensen receives The Academy of Sciences and Letters Silver Medal for his research into the processes surrounding the formation of stars and planets.

Jes Kristian Jørgensen’s career is unique in many ways. In particular, you note the unusually extensive and broad international experience, which he acquired very early in his career. This has since resulted in significant international networking activities, where he plays a central role.

Jes Jørgensen received a Masters degree in astronomy in 2000 from the Niels Bohr Institute at the University of Copenhagen and a PhD in astronomy from Leiden University in the Netherlands in 2004. As a postdoc he worked for almost three years (2004-2007) at the Harvard-Smithsonian Center for Astrophysics, USA, after which he worked as a staff scientist at the Argelander Institute for Astronomy, Univ. Bonn, Germany for almost three years (2007-2009).

In 2010, he returned to the Niels Bohr Institute, University of Copenhagen – now as an associate professor. It was a position he was headhunted for to get him back to Denmark and establish his own research group to take advantage the opportunities associated with Denmark’s participation in the large international Atacama Large Millimeter Array (ALMA) submillimeter telescope in northern Chile. Jes Jørgensen was then already an expert at researching the processes that lead from interstellar gas and dust clouds to the formation of planetary systems around stars like our own Sun.

In 2011 he received a Lundbeck Foundation Junior Group Leader Fellowship and in 2015 a European European Research Council (ERC) Consolidator Grant.

He has published widely, in association with various international research groups. He is the co-author of more than 125 peer-reviewed articles in international journals and has more than 5300 citations and an h-index of 41.

Jes Jørgensen participates as a Principal Investigator in several international programmes and sits as a member of the International Council. He has been the supervisor for numerous PhD students and postdocs.

The Silver Medal will be presented by the president of the Academy at a membership meeting Thursday, 5 November 2015. Accompanying the beautiful silver medal is a prize of 100,000 kroner for research.