Peter Lodahl, professor and head of the Quantum Photonics research group at the Niels Bohr Institute at the University of Copenhagen, has received a large and prestigious grant from the European Research Council, the ERC Advanced Grant. The grant of just over 18.6 million kroner (2½ million euro) has a duration of five years and is for the project: Scalable Quantum Photonic Networks. 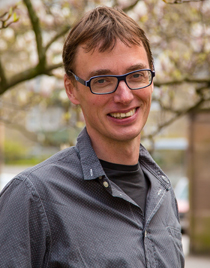 Peter Lodahl, professor and head of the Quantum Photonics research group at the Niels Bohr Institute at the University of Copenhagen has received just over 18.6 million kroner (2½ million euro) from the ERC’s Advanced Grant.

“Peter Lodahl has an outstanding track record in semiconductor-quantum optics and has had many excellent articles in prestigious scientific journals such as Nature, Science and Physical Review Letters. He has developed his own theoretical solutions and has simultaneously realised them in technologically challenging experiments. He is without a doubt an internationally visible researcher and he has demonstrated a great ability to lead a research team,” states the ERC’s justification for awarding the Advanced Grant.

The European Research Council’s, (ERC) Advanced Grant was established in 2008 and only 34 Danish researchers have since received this grant. This year, the ERC Advanced Grant received 2250 applications from the European research elite, so it is really an achievement to slip through the eye of the needle.

“It is fantastic that we have received such a large and significant grant after only having had the research group for 10 years and it is a huge recognition of how far we have come with our research. We have previously received funding from ERC’s Consolidator Grant, so our research over the past five years has been largely supported by international funds. This grant ensures that we can continue our research at a very high level,” says Peter Lodahl, who believes that quantum information will be the technology of the future. 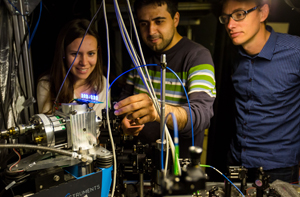 The Quantum Photonics research group carries out all of their experiments in the laboratory at the Niels Bohr Institute in Copenhagen.

The research involves developing technology for quantum communication based on circuits of light (photonics) instead of circuits based on electrons (electronics). The information is in the individual photon (light particle) and requires that you can create a stream of photons one at a time and can control their direction. Peter Lodahl’s group has therefore developed the world’s most effective photon gun integrated on an optical chip that means they can completely control the photons. This is the ultimate control over the interaction between matter and light and provides fantastic new opportunities for fundamental experiments and new technology.

The challenge of quantum physics

“It is a big challenge in quantum physics today to get the experiments that work on a small scale developed at a larger scale, so that it also works outside the lab and can become a practical reality and work as a quantum network. We want to take on this challenge. Our method is now becoming ripe for the development of quantum photonic networks,” explains Peter Lodahl.

Peter Lodahl received a Masters from Aarhus University in 1997 and a PhD in quantum physics from the Niels Bohr Institute in 2000. He was then a postdoc at Caltech in the United States and then at Twente University in The Netherlands. In 2005, he returned to Denmark to DTU, where he began to build up his own research group in quantum photonics. In 2011, he received a professorship at the Niels Bohr Institute and brought along his research group of eight researchers. The group has now grown to 15 researchers and the grant from the ERC Advanced Grant ensures that the research will continue. Peter Lodahl is the youngest Danish researcher to receive an ERC Advanced Grant.

Peter Lodahl, professor and head of the Quantum Photonics research group at the Bohr Institute at the University of Copenhagen. Tel: +45 2056-5303, lodahl@nbi.ku.dk - http://quantum-photonics.nbi.ku.dk