Albert Schliesser is a young top researcher who received his PhD in 2009 and now – only seven years later, has been appointed professor. Albert Schliesser works with quantum physics at the Niels Bohr Institute at the University of Copenhagen. 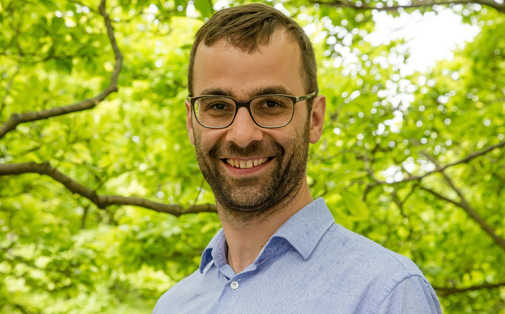 Albert Schliesser has been appointed professor in Quantum Optics.

Albert Schliesser is from Munich in Germany, where he grew up and was educated as a physicist. That he chose physics was in part due to his finding it easy to learn, but he had also discovered that it was a field with many possibilities. While studying at the Technical University of Munich and later Ludwig Maximilian University, he carried out a variety of experiments at other universities and institutes, including the Max Planck Institute.

“I discovered that I found it exciting to do all sorts of experiments in the various branches of physics and in particular I found the activities at the Max Planck Institute for Quantum Optics fascinating.  There I developed new techniques for laser spectroscopy. It turned out that we could use such techniques in the at that time exotic field we now call optomechanics.  This became my PhD project and it turned out to be a good choice,” concludes Schliesser, who is still passionate about exploring the magical world of quantum physics.

After a postdoc position at the Swiss Federal Institute of Technology in Lausanne, EPFL in Switzerland, he came to the Niels Bohr Institute in Denmark in 2013, which he describes as a ‘powerhouse’ in quantum physics. Here he conducts research where he investigates the interaction between nanomechanical motion, laser light and microwaves at the quantum level.

His research aims to utilise membranes that are so ultra-thin that you can measure them at the quantum level. This would increase the precision of mechanical sensors far beyond what has previously been possible. With these membranes as a link between electrical and optical signals, they will be able to measure radio and microwave signals in a whole new way – via light.

The signals from radio wave radiation create oscillations in the nanomembrane and they can now read the signal optically with extreme accuracy using a laser beam. This takes place via a complex interaction between the mechanical vibrations of the membrane, the electrical properties of an ultra-thin metallic layer and the light that hits the membrane.

This electro-opto-mechanical technique is a pioneering new method that allows for a sensitivity to electrical and other signals that is completely unprecedented. The goal is to develop new methods for processing and transmitting small signals and to harness the power from light for ultra-sensitive instruments that can measure even extremely weak signals from, for example, radio waves.

Albert Schliesser sees great potential in the new sensitive measuring method – for example, for equipment used in medical imaging and other fields where microwave signals need to be measured very accurately.

Another promising direction in the research is to explore the boundary between the classical physics that describes the macroscopic world around us and quantum physics, which describes the properties of matter at the atomic level. The laws of quantum physics are fundamentally different than the laws of classical physics. In quantum physics, a photon can be in two different places simultaneously or two photons can be ‘entangled’, that is to say, if you measure one photon, it immediately affects the other – even if it is far away.

“We want to create quantum entanglement between oscillations of the membranes, that is, objects that are visible to the naked eye and in effect macroscopic classical physics, but with quantum properties. It is basic research and the exploration of the frontiers of physics,” explains Albert Schliesser.

The research is now part of the new national centre, Qubiz, which Innovation Fund Denmark has invested 80 million kroner in to develop quantum technology for commercial use.