The EU will launch a €1 billion innovative quantum technology project. The project is a flagship with the objective of strengthening Europe’s leading position in the research on future quantum technologies. In order to develop a program of research, a steering committee of senior researchers and business people has been established. From Denmark, Professor Eugene Polzik from the Niels Bohr Institute at the University of Copenhagen has been appointed as a member of the steering committee. 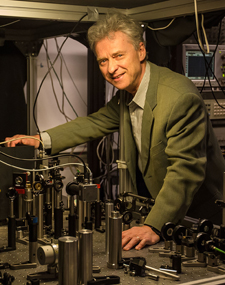 Professor Eugene Polzik from the Niels Bohr Institute has been appointed as a member of the steering committee for new EU quantum technology flagship.

The steering committee is made up of scientific experts from 12 European countries and 10 industry representatives.

“Our work will be to develop recommendations for the research strategy, governance model and implementation model for the Flagship, including commercial and industrial aspects. The strategy will be a long-term plan for the development of quantum technologies within different aspects including quantum communication, quantum computers, quantum sensors and quantum simulations,” explains Eugene Polzik, professor and head of the Center for Quantum Optics, Quantop at the Niels Bohr Institute at the University of Copenhagen.

The project has an initial ramp-up period of three years, after which the project itself will run for approximately 10 years. This major project for a billion euro will be funded in part by Horizon 2020 and in part by other EU sources as well as at the national level. The money will be used to develop an overall strategy and to propose concrete start-ups in both the short term and the long term.

“I am very happy to contribute to developing the concept for this exceptional project. The aim is to leverage the knowledge and research of the universities and to develop new technologies and jobs in collaboration with industry,” says Eugene Polzik.

The quantum optical research groups at the Niels Bohr Institute, University of Copenhagen

Eugene Polzik, professor and head of the Center for Quantum Optics, Quantop at the Niels Bohr Institute, University of Copenhagen, +45 3532-5424, polzik@nbi.dk