Jørgen Peder Steffensen has been appointed professor of ice core related research at the Centre for Ice and Climate at the Niels Bohr Institute at the University of Copenhagen.

Jørgen Peder Steffensen became wildly fascinated with geophysics and icecor research already during his student years. Here is the whole team that is going to move the Dome and all the drilling gear across the ice sheet to the new drilling site, Egrip.

Jørgen Peder Steffensen became a glaciologist by chance, but he became a physicist by choice, choosing between two great interests – physics and history. Jørgen Peder Steffensen is from Southern Jutland and here in the borderland the interest in history was awakened in earnest during his time at Ribe Cathedral School. When you hear him talk about the history of Denmark, you can tell that he is really passionate about sharing what took place and there is no doubt about his vast knowledge of world history. But he also found physics very interesting and he decided that physics would be his career and then history could be his hobby. It just so happened that it was this interest in history that led to him being a geophysicist and a glaciologist – for ice can tell you about history. 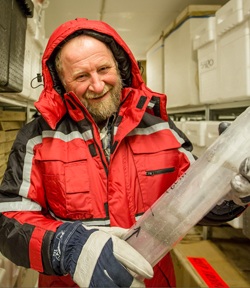 Jørgen Peder Steffensen, who is here in the freezer, where the icecores from Greenland are being stored, has been appointed Professor og glaiciology.

Struck by a meteor

He studied physics and mathematics at the University of Copenhagen and was almost finished with the first part when geophysics hit him like a meteor at 2 in the afternoon on 4 July 1980.

Jørgen Peder Steffensen had been professionally active for a period and had been elected as a student into the Study Board, which he then became chairman of. This meant that he was incredibly busy with both the professional work and with his studies. He got a little office and those around him had noticed how hard he worked, so when Willi Dansgaard lacked manpower for the Dye3 drilling on the Greenland ice sheet, they recommended that he contact Jørgen Peder.

“It was 2 in the afternoon on Friday, 4 July 1980 when Willi Dansgaard came and asked me if I wanted to go to Greenland and work on the drilling project for eight weeks. I thought it sounded exciting and was already on my way by Tuesday morning. We flew to Greenland and further into the Dye3 drilling site on the ice with a Twin Otter. I had no idea what I was supposed to do. The idea had been that I would cut the ice cores, but when I came down into the drilling hall, Niels Gundestrup pulled me into the drill control room and now I had to learn to drill ice cores. Among the researchers, Henrik Clausen was also very interested in history and he would say  that now we had now reached this layer and it corresponded to the time in which the French Revolution broke out and that they had been cold years, which meant poor harvests and hunger, or now we were in the years when the Vikings went out and settled in Iceland and Greenland. The ice cores could tell about the climate in the different periods and what impact it might have had on the course of history and I was wildly fascinated,” explains Peder Steffensen.

And the rest is history – so to say! 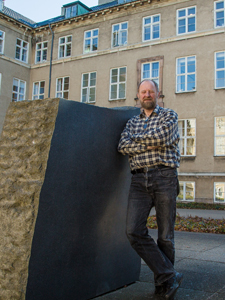 Scientifically, Jørgen Peder Steffensen has co-authored approximately 90 articles and was the first author of a handful. In particular, he works with the dust and chemistry in the ice cores and the stratigraphic analysis of the cores, which leads to precise dating and he is one of the most cited authors in geophysics in Denmark.

A life with ice cores

Jørgen Peder Steffensen has worked with geophysics and ice core research ever since then and ice core research also became a part of his private life, because during the Dye3 drilling project – in the middle of the Greenland ice sheet, he met a physics student Dorthe Dahl-Jensen, who he married, had four children with and has worked with ever since.

He did his PhD project on the drilling project. Though it was put on hold for a while, because he was too busy running the logistics for the project, being responsible for the ice core storage, working as the curator for all of the parties in the project and co-authoring several scientific papers.. In ’96, a new drilling project, NordGRIP, started with all of the work that entailed, but there was time for a detour to the European Dome C drilling project in Antarctica.

The Greenland ice sheet is formed by snow that falls year after year and remains, gradually being compressed into ice. By drilling ice cores through the kilometre-thick ice sheet, researchers can clearly see each annual layer and they can measure what the temperature was in the precipitation that originally fell as snow. In this way, they can determine what the climate was like over more than a hundred thousand years – how warm it was and how much precipitation fell.

“The ice core from the NordGRIP drilling is the most important core in Greenland, because there we got not only climate data for the entire ice age, but also for the previous interglacial period, the Eemian,” explains Jørgen Peder Steffensen.

Purely scientifically, he has co-authored approximately 90 articles and was the first author of a handful. In particular, he works with the dust and chemistry in the ice cores and the stratigraphic analysis of the cores, which leads to precise dating and he is one of the most cited authors in geophysics in Denmark.