Ben Mottelson, together with Aage Bohr, received the Nobel Prize for Physics in 1975 for their work describing the structure of the atomic nucleus. On July 9th, Ben Mottelson will turn 90 and even though he officially retired in 1994, he still comes into the Niels Bohr Institute every day and actively follows the research. 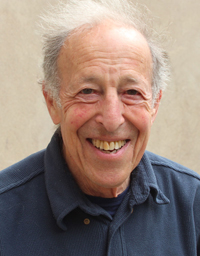 Ben Mottelson is an active man in general. He bikes to work and takes the stairs up to his office on the first floor at a brisk pace. “Is he really turning 90?” utter people spontaneously when they meet him in the corridors that he is at home in after working at the institute for more than 65 years. 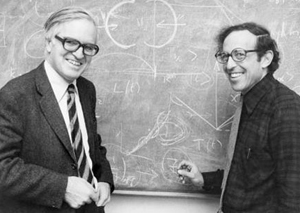 “Our collaboration was very strong and successful from the start. The Bohr family gave us a warm welcome and found us a house in Søborg, where we had good neighbours. My wife enjoyed living in Denmark, so we were very happy when I was offered a permanent position at the institute when the year came to an end,” explains Ben Mottelson.

By about 1950 there were two theories about the structure of the atomic nucleus, the so-called liquid drop model and the shell model. Both theories could explain some physical phenomena, but both also had shortcomings, which meant that the experimental results and theoretical predictions were not a 100 per cent match.

The two theories were in many ways opposing views of the structure of the atomic nucleus and could not easily be reconciled, but Ben Mottelson and Aage Bohr worked out a collective model that integrated features from both the liquid drop model and the shell model. In 1953, the two physicists published their results in a big article about their theory of the collective model of the structure of the atomic nucleus. 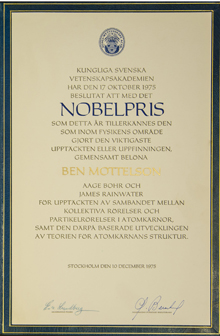 Nobel Prize diploma. In 1975, Ben Mottelson and Aage Bohr along with James Rainwater received the Nobel Prize for Physics for their discoveries about the structure of the atomic nucleus.

Aage Bohr and Ben Mottelson continued to work on their two-volume work on the structure of the atomic nucleus, Nuclear Structure, which came to change the understanding of nuclear physics and because it was based on quantum mechanical principles, it was also very important for understanding phenomena like neutron stars and superconductivity in solids. The first volume came out in 1969 and the second volume was published in 1975.

In 1975, Aage Bohr and Ben Mottelson along with James Rainwater received that Nobel Prize for Physics for their theories about the structure of the atomic nucleus.

In 1957, Ben Mottelson was appointed professor at the new research institute, Nordita, and he became a Danish citizen in 1971. The family had moved to Taarbæk, just north of Copenhagen. They had two more children and his wife got a job as a teacher at the Bernadotte School, which all three children attended. He biked the approximately 12 km to work at the Niels Bohr Institute every day. Here there was a special authority surrounding the two physicists.

Jens Jørgen Gaardhøje, who is now a professor at the institute, tells about his time as a student: “I remember that we had a lecture session every Monday morning where we met theoretical and experimental physicists. There sat Aage and Ben, always in the front row on the left side. All the older ones sat in the first rows and we young people sat in the back. So Aage and Ben always sat there and were the authorities in the field. And when you had to present your work, it was with both a little awe and also a great inspiration to have those two sitting there. You were very aware that you could not say a lot of nonsense. You had to be sharp! And if it was something that interested them, they would ask questions and would also often discuss it among themselves. Then it would get quiet in the hall and when they had thought through and discussed it, they would say: “just continue”. They were very interested in what we were doing experimentally”. 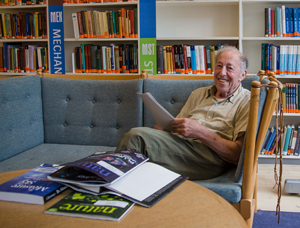 Ben Mottelson still comes on a daily basis to the Niels Bohr Institute, where he often sits in the library and follows the research by reading books and the newest scientific journals. (Photo: Ola Jakup Joensen)

Ben Mottelson’s first wife, Nancy (b. Reno) died young at an age of just over 40. He later married Britta (b. Sigumfeldt), who died a few years ago. Now he lives in an apartment on Sortedams Dosseringen, close to the institute and every day you can find him in the library, where he keeps up with the research by reading books and scientific journals. Here he also meets with colleagues who would like to discuss physics – for one thing is certain, you can still be sharp as a tack at the age of 90.

Ben Mottelson will be celebrated at a reception on Friday, July 8th, 2016 at 12:00-14:00 in Auditorium A at the Niels Bohr Institute at Blegdamsvej 17 in Copenhagen.