Denmark’s most famous and beloved physicist Holger Bech Nielsen turns 75 on the 25th of August. Holger Bech Nielsen is professor of theoretical high-energy physics, which is the study of the basic structure and organisation of the universe. He is famous for having conceived of string theory, but is also famous for his popular lectures and involvement in radio and television. Formally, he retired five years ago from the Niels Bohr Institute, where he had been employed since 1968, but as the active and energetic man and scientist he is, he still comes to the institute and continues his work as a physicist, researcher and lecturer. 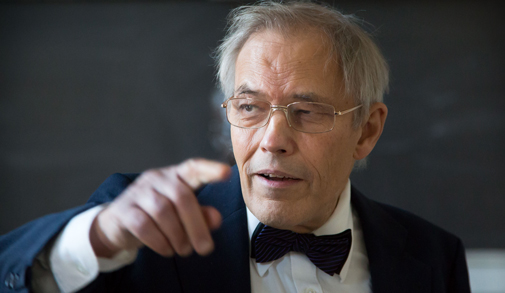 Holger Bech Nielsen is a physicist in the field called theoretical high-energy physics, which is the exploration of the structure of the universe in the form of the smallest elementary components of atoms, the fundamental physical forces and advanced quantum theories. He is internationally renowned for his contributions to string theory, which describes the universe’s smallest building blocks as small, vibrating strings – a theory that unites quantum mechanics with Einstein’s general theory of relativity. 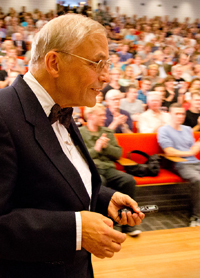 To Holger Bech Nielsen’s farewell lecture the biggest auditorium with room for 400 people was filled to the bursting point.

Another of his achievements is his calculation of the mass of the Higgs particle. For many years the Higgs was purely a theoretical particle that should cause all particles to have a mass, that is to weigh something. In 2012, the Higgs particle was sensationally demonstrated in the experiments at CERN and the mass was measured at 126 so-called gigaelectron volts. But several decades earlier Holger Bech Nielsen predicted the mass to be approximately 129.4 gigaelectron volts – that is, within a margin of plus/minus 5, which he says with some pride.

Physics as a crowd-puller

Holger Bech Nielsen is a highly renowned researcher worldwide and he is also an incredibly sought after lecturer – for example, the lectures he has held during Culture Night for years are so popular that people queue along much of Blegdamsvej to get into the Niels Bohr Institute and hear him. The atmosphere and anticipation sizzle like a rock concert. Everyone wants to get in and experience the charismatic physicist. 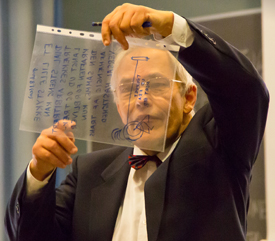 Holger Bech Nielsen is a highly renowned researcher worldwide and he is also an incredibly sought after lecturer.

“Everybody loves Holger. From street sweepers to the queen, there is no question that he is Denmark’s best known and most beloved scientist. It is strange, because at the same time he has the most exotic and speculative ideas. Or perhaps that is why. After Holger’s popular lectures you often hear the comment: "I did not understand it, but it was very exciting”. Holger does not really try to popularise his science. On the contrary, he has a tendency to fall back into technical terms, especially when he gets excited. He is alleged to have told the queen at a meeting at the Academy of Sciences and Letters that “the strange thing is that at low temperatures our universe has the structure U(1)xSU(2)xSU(3)". When Holger explains his physics he does not distinguish between high or low, between researcher or layman. Everyone must surely be able to understand such a simple mathematical expression like that,” explains Benny Lautrup, professor emeritus at the Niels Bohr Institute in the foreword to the book Holger’s Universe by Jens Kerte.

Benny Lautrup has known Holger Bech Nielsen since 1961, when Holger turned up at the Niels Bohr Institute to study physics. Even though he is only a little older than Holger, he was his student instructor for a short while and he explains that he was immediately struck by his brilliance; 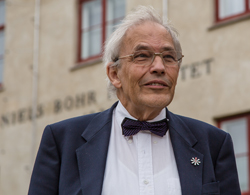 Formally, Holger Bech Nielsen retired five years ago from the Niels Bohr Institute, where he had been employed since 1968, but as the active and energetic man and scientist he is, he still comes to the institute and continues his work as a physicist, researcher and lecturer.

“He had no trouble doing the assignments in the rather boring basic course I had to teach, but he would much rather discuss advanced quantum field theory. His unusual sense for physics combined with a contagious cheerfulness quickly made him the institute’s favourite student. His abilities really unfolded in the late 1960s, when he realised that a somewhat strange mathematical model of particle behaviour could be interpreted to mean that deep down matter is comprised of small rotating bits of string.”

He is no longer as enthusiastic about this theory. Holger Bech Nielsen is one of the fathers of string theory, but as he says himself, he is a bad father because he no longer believes in it very much. But string theory is not completely dead, for he explains that ‘vortex lines’, which is a mathematical attempt at a quantum field theory, are inspired by string theory, just like ‘supersymmetry’ stems from string theory.

Discovering the world of physics When Holger Bech Nielsen first begins to talk about physics, he gets excited and you sense that for him physics is a journey of discovery where new discoveries can provide another little piece for solving the mysteries of the structure of the universe. “So they did not find that particle in the LHC at CERN,” he exclaims. “That was sad, it died. F750 we miss you”, he says about the particle they just had to rule out the existence of in the experiments at CERN. It had otherwise fit well with his theories. 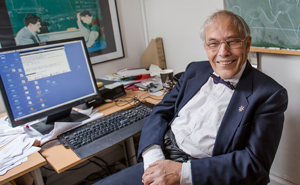 Holger Bech Nielsen is trying to get almost 50 years of work under control. The office is filled with moving boxes, as the National Archives would like to have all of his papers and handwritten notes. Lists of everything is carefully written down on the computer to every box – he has come to box number 32.

But the work continues and right now he is also trying to get almost 50 years of work under control. The office is filled with moving boxes, as the National Archives would like to have all of his papers and handwritten notes in which he arrived at the results that are published in his scientific articles.

Now Holger Bech Nielsen is turning 75, but he is not quitting – he will continue, “You have to work,” as he says, for physics fascinates him and he wants to continue to explore the world.