Jacob Bourjaily, Assistant Professor of Physics at the Niels Bohr International Academy, has been awarded a Starting Grant worth €1.5 million from the European Research Council (ERC). The project, The Surprising Simplicity of Scattering Amplitudes, will run for five years starting in 2018. 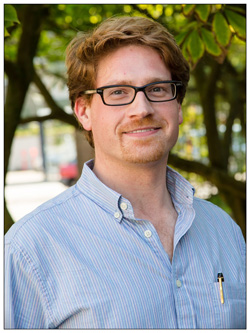 Jacob Bourjaily, Assistant Professor of Physics at the Niels Bohr International Academy, has been awarded a Starting Grant worth €1.5 million from the European Research Council (ERC). Photo: Ola J. Joensen

Quantum field theory is the modern analog of Newton's "force = mass times acceleration"; it is a broad mathematical framework which can be used to compute quantum mechanical (probabilistic) predictions given any quantum version of a force among particles. For any particular theory, scattering amplitudes encode the predicted, relative probabilities of the possible outcomes for any experiment. They represent the bread-and-butter predictions for any quantum theory, and are extremely important for experiments such as the Large Hadron Collider and the discovery of the Higgs boson.

Despite their importance, scattering amplitudes are notoriously hard to compute using traditional methods of Feynman diagrams. And yet, however they are computed, these functions are universally simpler than our efforts to compute them would suggest. For certain quantum theories, much (if not all) of this simplicity has been made manifest using modern methods—which greatly extends our predictive reach. The ERC grant will be used to explore, elaborate, and exploit such simplicities for a broad class of quantum theories.

Bourjaily did his undergraduate studies at the University of Michigan, after which he completed a Masters in Mathematics at Cambridge University on a Marshall Scholarship. He completed his doctoral dissertation at Princeton University in 2011, after which he was elected a Junior Fellow in the Harvard Society of Fellows. He has been at the NBI since 2014, and recently received a Young Investigator Award from the Villum Foundation.