Danish National Research Foundation is willing to donate up to 62 million kroner to a new research centre at the Niels Bohr Institute, University of Copenhagen. The new Centre of Excellence will be named Hybrid Quantum Networks (Hy – Q). The ambition is to pave the way for the first quantum internet in the world, namely a completely unbreakable network that will transform the way we communicate today. 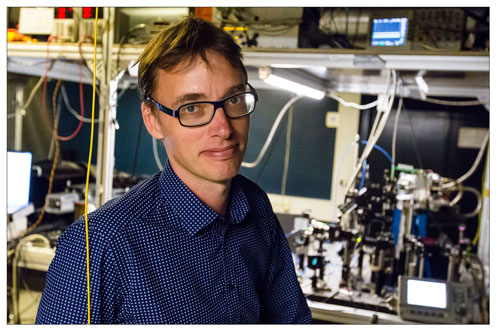 Peter Lodahl who is an international leader within developing technology to quantum communication based on circuits of light (photonics) will become the head of the new basic research center.

The Hy-Q research centre, led by Professor Peter Lodahl, will develop quantum physical objects that have never yet existed in the physical world. The quest is to push the limits for the size and complexity of such quantum networks. If he succeeds the ultimate result will be a quantum internet that will transform the ways of communication, and potentially could create new solutions to societal challenges such as energy and security:

”The ultimate vision for our research is a quantum internet. You will be able to code and distribute information one photon at the time, and by doing so you can process huge amounts of information. At the same time the quantum internet will be unbreakable as it will be secured by the laws of quantum physics” says Professor Peter Lodahl.

”It is a unique chance to establish a large research centre on quantum networks. In order to succeed with this great challenge we need to take a long perspective. We will be able to recruit and nurture the best researchers in quantum physics. In the centre we will learn how large a quantum system we can create, while it still maintains the quantum physical properties we study at the atomic level. It is new physics that has a long term application potential” says Peter Lodahl.