Gary Shaffer, Professor Emeritus at the Niels Bohr Institute, and Jens Olaf Pepke Pedersen from DTU have made the year’s most important scientific discovery, according to the users of Videnskab.dk.

A climate news story, which the researchers themselves call »bad news for humanity «, has been voted the best Danish Research Result of the Year for 2016 by the readers of Videnskab.dk.

Gary Shaffer, Professor Emeritus at the Niels Bohr Institute at the University of Copenhagen, in collaboration with Jens Olaf Pepke Pedersen from DTU, has discovered that the Earth’s temperature could rise more than previously anticipated, as a result of human emissions of greenhouse gases like CO2.

The award-winning study shows that when the Earth’s temperature rises, water vapour, clouds and other components in the Earth’s atmosphere amplify the effects of the greenhouse gases, so that the temperature of the planet rises even more than expected in a vicious circle process.

According to Gary Shaffer, this could mean that the increase might be 4-5 degrees instead of the expected 2-3 degree, so the study highlights the importance of reducing greenhouse gas emissions as quickly as possible.

Despite the gloomy prospects, Gary Shaffer welcomes the award as he sees it as an expression of the growing awareness that climate change is critical for humanity.

The scientists have described the effect by studying the climate during a global warming, which occurred around 56 million years ago.

This warming was initiated by massive carbon emissions into the atmosphere and can therefore be compared to the current global warming.

»We are not the first to describe the climate during this period, but we have used many different types of data, put them together in our study and interpreted them in a new way. This means that we can describe the temperatures and climate sensitivity with far greater certainty than other studies,« says Gary Shaffer, who is the lead author of the award-winning study.

The study, published in the scientific journal Geophysical Research Letters, walked away with the prize in competition with 93 research results, which were nominated by researchers, universities, research communities and users.

From those nominated, Videnskab.dk's editorial board shortlisted 10 research teams, after which the users chose the winner by voting in February this year.

»One of the criteria for winning the prize of Danish Research Result of the Year is that the results must important for society. This is very true of this year’s winner with the uncovering of new evidence that climate sensitivity is increasing with global warming, which can then lead to a previously overlooked self-reinforcing effect, « says Vibeke Hjortlund, editor-in-chief for Videnskab.dk

Other KU researchers were runner up

Videnskab.dk writes that two results from KU researchers were close on the heels of this year’s award recipients. These researchers received honourable mentions for their scientific work.

One result demonstrates solid evidence that the risk of giving birth to a child with asthma decreases if the mother uses fish oil during the last trimester of the pregnancy. Leading the research team is Professor Hans Bisgaard from COPSAC and the University of Copenhagen.

The other result shows that spying between bacteria makes them extremely ‘adaptable’, a discovery that may help us in the fight against antibiotic-resistant bacteria. Assistant Professor Jakob Krause Haaber from the University of Copenhagen is the main author of the study. 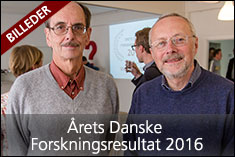