Lars Egstrøm Kristensen receives 9.3 million DKK to look for the building blocks of life in the Universe

From dead molecules to life – but how? Lars Egstrøm Kristensen, associate professor at the Astro and Planetary research section, has received 9.368.760 DKK from the Villum Young Investigator programme. This is one of three grants going to researchers from the Niels Bohr Institute. Lars Kristensen’s project will attempt to fill out some of the blank spots in our knowledge on how the molecules we find in star clouds move towards still greater complexity, and ultimately may end up as something resembling our perception of life. As it is, we are already finding rather complex molecules out there, like, for instance, sugar. 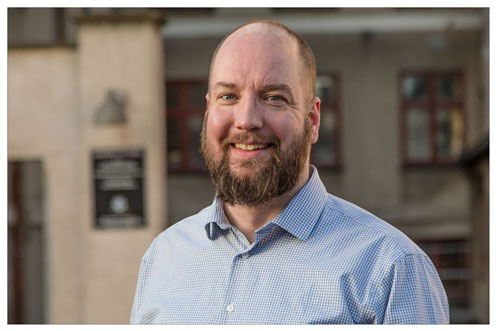 The environment in a star cloud

In short, the method is this: 10 different locations in a star cloud are investigated. Lars Kristensen has received datasets from SMA – (SubMillimeter Array in Hawaii) and ALMA (Atacama Large Millimeter/submillimeter Array – the largest earth based telescope array in the world) and he looks into how the chemical composition differ, depending on the location in the cloud. A star cloud is not homogenous, there can be huge differences in temperature or perhaps density, depending on the location. But these differences are applicable when assessing the role the environment plays for molecule production. The proto stars in particular are situated in different positions of a first-generation of stars, emitting large amounts of UV radiation. UV radiation can affect molecules both by destroying some types of molecules and creating optimum conditions for the production of others.

“I observe the ‘fingerprints’ from all sorts of molecules and I make an inventory over which molecules can be found where – and how much we find of each. Then I look for possible connections between them and the environment of their production”, says Lars Kristensen. It is pretty close to being a detective. Not only is it necessary to know which situations pave the way for the possibility of life, it must also be known which situations can be characterized as “false leads”.

In other words, a meticulous categorization of environment: Temperature, density, pressure, coupled to the presence of molecules, is the task. The chemistry in space must be understood. How does it react to the conditions in the cloud, simultaneously taking into account how the chemistry feeds back into the conditions. There is a constant feedback mechanism going on between chemistry and physics.

But it doesn’t end here. When we have knowledge on molecules and their environments, how the production of molecules are affected by the environment and vice versa, we can start addressing the next steps toward conditions supporting life. 99 % of the mass in the clouds of molecules consists of gas and 1 % is in the shape of tiny dust grains, primarily micrometer size. “When a molecule collides with a dust grain, it freezes. Little by little a layer of different molecules builds up, and we believe that most of the more complex molecules are actually produced on the surface of the dust grains, in this “ice” of different molecules – but we still haven’t found “the smoking gun”. We can observe what goes on in the gas phase, but still not in the “ice” phase. That will be one of the things I will be concentrating on, when the James Webb telescope is launched in the beginning of 2019”, Lars Kristensen tells us. The task is basically to accumulate knowledge about this chain of events, so we can map the road from molecule production to, in the end, the situation that forms the backdrop for the production of life on a planet.

To the drawing board!

Lars Kristensen is expecting to employ a postdoc and two Ph.D. students, as a consequence of the huge amounts of data that must be interpreted and turned into scientific results. He is already collaborating closely with Jes Jørgensen, Lecturer at StarPlan, the research center at the Niels Bohr Institute, where he is employed himself. The employments the Villum grant allows him to make, will mean a significant strengthening of the work on the subject already going on.