Monica Ritterband, who as a child lived next to the Aage Bohr family for several years, has recently painted a double portrait of the two Nobel laureates Niels and Aage Bohr. 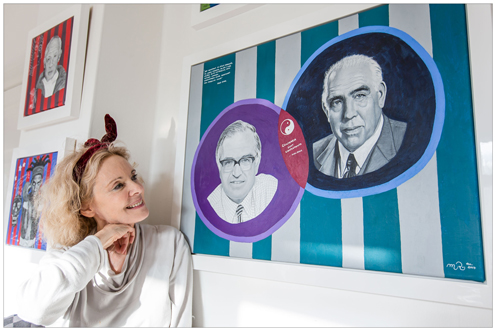 The 11 portraits in the series 'Lighthouses on stripes’ were all painted in 2017 in Monica’s studio in Odsherred, often late into the night. Seen in the middle of the Bohr portrait is Niels Bohr’s coat of arms with the yin and yang symbol and the inscription “CONTRARIA SUNT COMPLEMENTA”. It is Latin and means, “opposites are complementary” or “opposites together constitute a whole”. Photo: Ola J. Joensen, Niels Bohr Institute

The portrait series began with Picasso, followed later by different personalities such as Nelson Mandela, Golda Meir, Albert Einstein, Kim Larsen and others – all lighthouses that have inspired her and made a difference in her life. There is a very special reason for her choosing to portray the Bohrs and that is that the Bohr family were more than just neighbours, their home was also her second home.

From journalist to deputy CEO to artist

She is perhaps best known as a former DR journalist at the TV news until the late eighties, appearing as the face of the daily news to Danish viewers. She later served as the head of information and deputy CEO of the Carlsberg Group, stopping in 1997 to devote herself to her great passion, art and design. Perhaps not a decision that would be easy for most – leaving such a high position and security for an uncertain future as an artist. “It is about not putting off what you are most passionate about,” says Monica Ritterband, who took her own advice. She took the plunge and has not regretted it.

Monica Ritterband was born in 1955. She is the daughter of Olly and Daniel Ritterband. Her mother was a photographer and artist and her father was a businessman. Throughout her childhood, the family lived in house next door to Aage and Marietta Bohr and their three children - Vilhelm, Tomas and Margrethe Paula Bohr, who Monica was friends with. She crawled through the hole in the hedge and if Margrethe Paula was not home, she could always sit in the kitchen with Marietta and draw and paint, and if Marietta were not home either, she would sneak into Aage’s office, where she was allowed to be if she could be quiet.

She was, for she loved being in their company, where there was always a peaceful atmosphere, unlike at home where it could sometimes get chaotic. 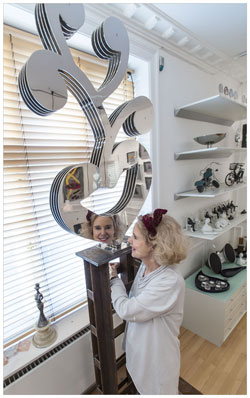 Monica Ritterband has worked with several genres of art, from mosaics to sculptures to painting. And her upcoming exhibition at the Æglageret in Holbæk runs from 17 November to 22 December 2018.

My second home on the other side of the hedge

“I loved the Bohr family. I always felt appreciated and welcomed by them. And for many years, I secretly wanted to trade my own much more unstable and temperamental family for theirs,” says Monica, and talking about her process of painting Aage and Niels Bohr, “I painted Aage first. I wanted to paint him precisely at the age he was when I came into their home. And as his face appeared clearer and clearer on the canvas, I relived his laughter, his warmth and gentleness. He always spoke so respectfully to us children. We were whole people in his eyes.

It was with trepidation that I showed a photograph to his children, did they see him as I did? His daughter immediately wrote to me that “it’s like seeing my father again”. Nothing could have made me happier”.

Monica goes on to explain, “Once my parents told me that Aage had the code for an atomic bomb, just like his father, Niels Bohr. I thought about that a lot as a little girl. I remember one day where I was sitting and drawing at Aage’s desk. I was probably six or seven years old. I sat there on the chair with my legs dangling in the air. Aage sat across from me with his glasses sitting on the end of his nose. I think I was sitting a bit restlessly because he looked up. Smiled kindly. And so I pulled myself together. “Is it true that you can make an atomic bomb?” Aage set his glasses on the table and tilted his head slightly. “If you promise me not to tell a single person, I’ll tell you a secret. Can you promise me that? “ I nodded deeply and very seriously. “Look there.” He pointed at the large corner cabinet that I had once seen him standing in. “I have the bomb in there. Now you know it.”

He chuckled. I got a big head. I was very proud. What a secret. I kept it for several days and then I could no longer, bursting out with it during lunch with my parents who laughed and laughed.”

Statements from Aage Bohr’s sons
“You have really made some lovely portraits, it expresses them both in a fine and sensitive way.” Professor Vilhelm Bohr

“They are some very lifelike portraits that give me a warm and intimate sense of them both. They highlight some of their best sides and at the same time the huge difference between them.” Professor Tomas Bohr.

See some of the paintings: 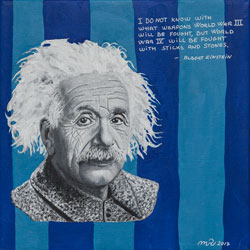