Mark has done a great job in the course, which he taught for the first time this year. He had done a thorough process that ensured that the course was coherent, both internally and with both previous and subsequent courses. 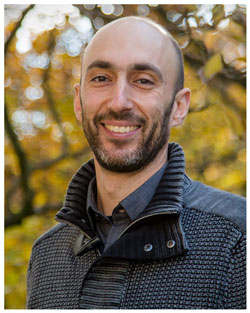 The Jens Martin prize is awarded by the students with the support of the Niels Bohr Institute's teaching committee. The price follows an operating license of DKK 10,000.

The students write below why Mark must receive the prize:

Mark Rudner deserves this award for his amazing work as a lecturer and organizer of CMP1. Mark manages to establish continuity throughout his own course by sticking to an intuitive and understandable plan, in addition to continuity throughout the entire degree by referring to material from other courses and providing a natural continuation from statistical mechanics and the mandatory QM and EM courses.

In addition to his abilities as an organizer, he is an engaging and knowledgeable lecturer who is very willing to take notes and criticism from the students and implement them in the lectures, making each lecture better than the previous ones.

He makes the subject of condensed matter physics both interesting and accessible and provides an excellent offset for the subjects presented in CMP2.

In short, he has made CMP1 great again.