Microsoft and University of Copenhagen are building the world’s first, scalable quantum computer in Lyngby

Minister of Higher Education and Science, Tommy Ahlers (V) is cutting the ribbon today when the Microsoft Quantum Materials Lab opens in Lyngby in collaboration with the Niels Bohr Institute at the University of Copenhagen and DTU. The lab will be the first place in the world, where the heart of the quantum computer - the so-called qubit – will be developed. 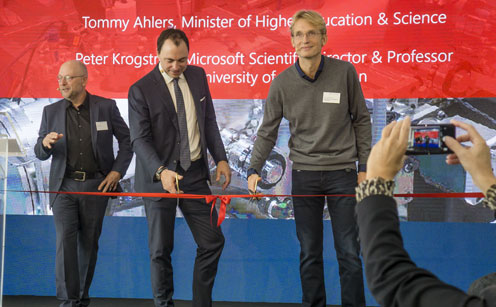 Minister of Higher Education and Science, Tommy Ahlers is cutting the ribbon together with prof. Peter Krogstrup, leader of the new Quantum Materials lab.

Today Microsoft is officially opening the doors to the brand-new Microsoft Quantum Materials Lab at its Lyngby site, where together, researchers and engineers from the Niels Bohr Institute at the University of Copenhagen, the Technical University of Denmark and Microsoft, will build the actual materials for the first scalable quantum computer in the world.

The aim is to create the computer of tomorrow - a quantum computer - with powers so significant that it will decisively transform the boundaries of what’s possible. This is the next step of an already established collaboration with the Niels Bohr Institute at the University of Copenhagen, that possesses some of the world-leading scientific resources within quantum physics and the Technical University of Denmark, that has leading experts within nanofabrication.

Microsoft is running four other large quantum centers around the world and a large worldwide collaboration but the heart of the computer - the so-called qubit - will be developed from the Microsoft Quantum Material Lab in Denmark. 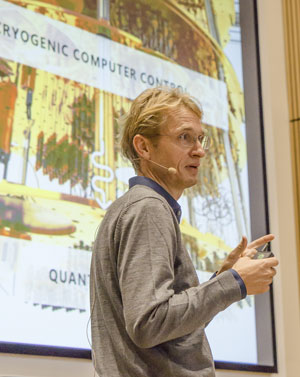 Peter Krogstrup is hopeful that the new settings will lead to global breakthrough for the new laboratory in Lyngby.

Microsoft’s Scientific director Peter Krogstrup, who is also a professor at the Niels Bohr Institute, University of Copenhagen, will be responsible for running the lab on a daily basis - and he’s hopeful that the new settings will lead to global breakthrough:

“The new Materials lab will make it possible for us to take our research to the next level and the ramifications of such an innovation could have a great impact in society. A Quantum computer would be able to make certain calculations in minutes that a traditional computer would take billions of years to solve. The challenge is that the quantum states used for the actual calculations are extremely fragile and difficult to sustain and read off. That’s one of the things that we are now able to investigate further here in Denmark, and hopefully it will lead to a global breakthrough” says professor Peter Krogstrup.

The temperature is for example particularly decisive for the quantum states, and therefore the computer itself must be cooled down to absolute zero. Another example is that the materials in which the quantum states are located must be perfect. Not an atom can be misplaced – literally and some materials seem more applicable to contain the qubits than others. This will now be investigated further at the Microsoft Quantum Materials Lab.

The increased power of the quantum computer will be relevant in many contexts within our society:

“We anticipate a need for increased computing power within a number of areas. The quantum computer will in the long run play a crucial role when it comes to developing and improving medicine, enabling researchers to develop new types of material and increasing cyber security to a new level. But not only that, it’s also a completely new way of thinking”, Peter Krogstrup says.

That Microsoft has chosen to place the Quantum Materials Lab in Denmark and collaborate with the University of Copenhagen is no coincidence. The long and strong Danish tradition and history of quantum research and the Danish expertise within this field has roots going back to H.C. Ørsted and Niels Bohr.

Managing director of Microsoft Development, Charlotte Mark is very optimistic regarding the possible results of the collaboration:

”Copenhagen University is among the leading institutions within the field of quantum research in the world and in Microsoft we have a long tradition of both developing and applying intelligent technology. It’s our hope and ambition that by combining our resources we can take quantum computing to the next level, where it will have a great benefit for our society”, Charlotte Mark says.

Microsoft has invested significantly in the new lab, that is scheduled to run for a number of years. It’s the next step in the collaboration between Microsoft and the University of Copenhagen established in 2017 and with the scope of creating the first scalable quantum computer in the world.