Bronze relief of Nobel laureates at the Niels Bohr Institute

The Niels Bohr Institute in Copenhagen is probably the only building in the world that has provided the setting for no less than four Nobel laureates. A new bronze relief has been made in celebration of the 100th anniversary of Niels Bohr’s atomic model and in commemoration of the four physicists. It was unveiled in a ceremony on Thursday, May 16. 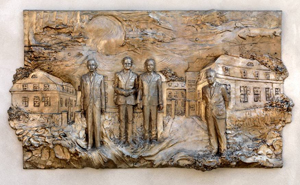 The bronze relief is 165 cm wide and 90 cm tall and the motif is the four physicists, Niels Bohr, George de Hevesy, Aage Bohr and Ben Mottelson with elements that characterise their work and featuring the buildings of the Niels Bohr Institute in the background. The relief is created by the sculptor Rikke Raben.
(Photo: Anne Prytz Schaldemose)

Around 100 employees, students, invited guests and members of the media attended the unveiling. With the Sun shining from a cloudless sky, it felt like the first day of summer and the atmosphere was similarly bright and hopeful – a work of art honouring not just one, but four Nobel laureates was about to be presented.

“It is my great pleasure to present this bronze relief honouring the four Nobel laureates from the Niels Bohr Institute. It was Niels Bohr who founded the institute, creating a fundamentally new way of thinking in physics and simultaneously managed to create an international environment that attracted some of the finest researchers from around the world,” said Professor John Renner Hansen, dean of the Faculty of Science. 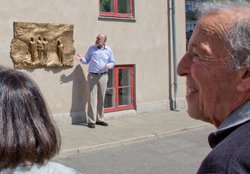 “It is my great pleasure to present this bronze relief honouring the four Nobel laureates from the Niels Bohr Institute,” said Professor John Renner Hansen, dean of the Faculty of Science.

The bronze relief is 165 cm wide and 90 cm tall and the motif is the four physicists, Niels Bohr, George de Hevesy, Aage Bohr and Ben Mottelson with elements that characterise their work and featuring the buildings of the Niels Bohr Institute in the background. The relief is created by the sculptor Rikke Raben, who used different structures and forms to create an image that shows the work of physicists and the exploration of the forces of nature that takes place at the Niels Bohr Institute. 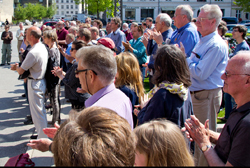 The square in front of the Niels Bohr Institute building on Blegdamsvej was completely full when the new relief was unveiled at a ceremony on May 16th.

Attending the ceremony was one of the four Nobel laureates, Professor Ben Mottelson, who is still active at the age of 86 and comes to the institute almost every day, where he diligently follows developments in his research area and works on new scientific articles.

Ben Mottelson came to the Niels Bohr Institute in 1950 on a one-year scholarship from Harvard –and he has been here ever since.

“Already in the earliest years at the institute, I began to work with Aage Bohr. We developed a very close working relationship and my wife, my children and I were practically taken into the Bohr family. Once we were invited to a large dinner held by Niels Bohr at the Carlsberg residence and afterwards Niels Bohr drove us home in his car,” describes Ben Mottelson. 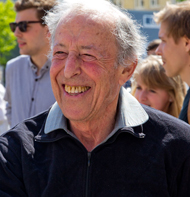 Ben Mottelson received together with Aage Bohr in 1975 the Nobel prize for their model of the structure of the atomic nucleus. Ben Mottelson is now 86 years old and still active at the institute.

On now being honoured by being included on the new bronze relief he says quite modestly – “well it shows that the institute is happy that I have been here.”

Two bronze reliefs have been made, which are slightly different. One is now installed at the Niels Bohr Institute’s building at Blegdamsvej 17. The other will be exhibited from the end of May to approx. September 1st at The Museum of National History at Frederiksborg Castle in Hillerød. There will also be a special exhibition of objects related to Niels Bohr – including paintings, drawings, some of his scientific writings and is Nobel medal. In addition, you can also see objects belonging to other Danish Nobel laureates such as Aage Bohr, Ben Mottelson, Niels Finsen, Johs. V. Jensen and others. The second relief will later put up on the new Niels Bohr building to be constructed on Jagtvej. 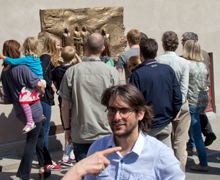 The bronze relief is placed on the building that was the Niels Bohr family dwelling from 1926-32. It is now the institute’s administration building.

The intention of the two sister reliefs is that they can help illustrate the physics concept of “entanglement”, which is a kind of invisible link between two atomic systems. In that way, the reliefs will connect the two places and carry on the spirit of international collaboration, courage, strength, openness, curiosity and mutual strength, which the Niels Bohr has a tradition of.

The relief was created with support from: Johann and Hanne Weimann né Seedorff grant, the Brødrene Hartmanns Foundation and the Consul George Jorck and Wife Emma Jorck's Foundation.

How the bronze relief was created