Usually, when researchers work with quantum information, they do everything they can to prevent the information from decaying. Now researchers at the Niels Bohr Institute, among others, have flipped things around and are exploiting the decay to create the so-called entanglement of atomic systems, which is the foundation for quantum information processing. The results are published in the scientific journal, Nature. 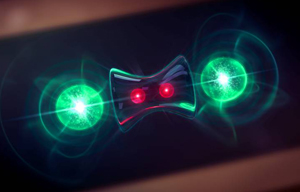 An artists impression of the experiment. Four ions are trapped on a line. The outer Magnesium ions (green) cools the system by emitting light. Lasers are used to prepare the inner Beryllium ions (red) in an entangled state where one can not understand the state of the particles individually but have to consider the two ions as a whole. As opposed to previous experiments also the latter process happens by the emission of light. (Credit NIST).

“When working with quantum information, you would normally seek to isolate the system from the environment in order to not get a disturbing interaction that can destroy the fragile quantum state. But this is very difficult to avoid completely. So we thought that you could perhaps take the opposite approach and instead of seeing decay as the enemy, look at it as a friend and take advantage of it,” explains Anders Søndberg Sørensen, a professor of quantum optics at the Niels Bohr Institute at the University of Copenhagen.

The problem is that the quantum system is affected by the environment and exchanges energy with it. The electrons in the atoms jump from one energy state to another and researchers consider this kind of jump to be decay, because the information stored in the electrons disappears into its surroundings.

“But with our method we let the quantum system ‘talk’ with its surroundings and create a control of the electrons’ jumps so that they are precisely in the state we want them to be in, and in that way we make use of the interaction with the environment,” explains PhD student Florentin Reiter, who developed the theoretical model for the method together with Anders Sørensen. 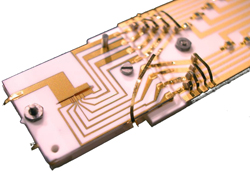 The ion trap used in the experiment. Electrical potential are applied through thin gold wires on a chip and used to trap ions in a narrow slot. (Credit NIST).

The research is a collaboration with the experimental research group lead by David Wineland (recipient of the Nobel Prize in physics last year) at the National Institute for Standards and Technology in Boulder Colorado, USA.

Kicking the electrons into place

The method is based on a chain of ions comprised of magnesium and beryllium. They are cooled down to near absolute zero at minus 273 degrees C. The magnesium atoms are just there as a kind of cooling element in the chain of ions, while the beryllium atoms are the active elements. Entanglement is created between the electrons of the beryllium ions using carefully controlled laser light. 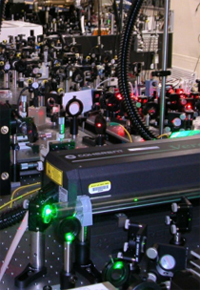 The lab where the experiment was performed. (Credit NIST).

“The trick lies in the combination of laser light,” explains Florentin Reiter and continues “the electrons can be in four energy states and if they jump around and land in a ‘wrong’ state, they are simply ‘kicked’ by the laser and we continue until they are where they are supposed to be. In that way there is perfect entanglement. Unlike in the past, when you had to use carefully designed laser pulses to create entanglement, researchers can now just turn on the laser and grab a cup of coffee and when they come back the electrons are in the correct state.”