Sunday, the 7th of July around 400 young people from around the world will be arriving in Denmark to compete in the International Physics Olympiad. It is a competition for students up to 20 years old from all over the world who are accomplished in the field of physics. In Denmark, they are typically students who have just graduated from upper secondary school or are in 2.g. The best students receive recognition in the form of gold, silver and bronze medals. 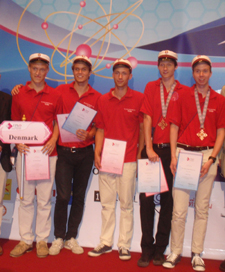 It was already determined in 1998 that Denmark would play host in 2013. The year 2013 was chosen because it is the 100th anniversary of Niels Bohr’s groundbreaking theory of the hydrogen atom – an anniversary that is being celebrated in many ways.

Hosting is a very big job. Around 750 students, leaders and observers from around the world will visit Copenhagen. In addition, there are approximately 250 local participants (organizers, guides, markers and assistants, etc.)

Preliminary competitions in each country

This year there are participants from 83 countries and each country can send 5 participants. Each country has a selection competition first. In Denmark, the problems were first sent out to the country’s upper secondary schools and technical colleges, HTX. 200 tests are typically returned to the OL committee. Based on these tests, the 35 best students are found and invited to Copenhagen, where to take another test. The 12 best students are selected based on this and they receive intensive instruction every third weekend through the following winter and spring. In April, the 12 take another exam and then the 5 students who will participate in the International Physics Olympiad are chosen. 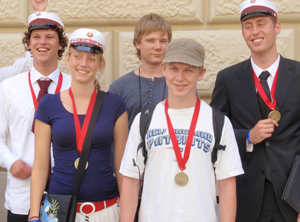 The competition was first held in 1967 in Poland and in the early years it was a Eastern European event. But more and more countries gradually joined. For example, Sweden joined in the mid seventies and the U.S. in the mid eighties. Denmark first took part in 1996 and has participated every year since then. In recent years, more than 80 countries have participated, including all the countries we normally compare ourselves with. Each country is represented by five students, regardless of their size. The International Physics Olympiad is surrounded by great prestige and media attention in many countries and this helps to put the field of physics on the table.