Explosive dynamic behaviour on Twitter and in the financial market

Over the past 10 years, social media has changed the way that people influence each other. By analysing data from the social networking service, Twitter, and stock trading in the financial market, researchers from the Niels Bohr Institute have shown that events in society bring rise to common behaviour among large groups of people who do not otherwise know each other The analysis shows that there are common features in user activity on Twitter and in stock market transactions in the financial market. The results are published in the scientific journal, PNAS, Proceedings of the National Academy of Sciences, USA.

“The whole idea of the study is to understand how social networks function. The strength of using the popular social media, Twitter, is that they are more than 200 million users worldwide, who write short messages about immediate experiences and impressions. This means that you can directly study human behaviour in crowds on the web. Twitter can be seen as a global social sensor,” explains Joachim Mathiesen, Associate Professor of physics at the Niels Bohr Institute at the University of Copenhagen. 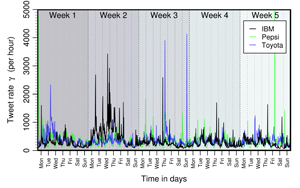 The figure shows how often the international brands IBM, Pepsi and Toyota have been mentioned during a five-week period on Twitter. The activity is during long periods relatively steady and is then interrupted by sudden activity spikes. The research from NBI shows that there are common features in user activity on Twitter and in stock market transactions in the financial market

Joachim Mathiesen developed a programme that could follow the use of Twitter constantly. He could see that there were periods with relatively steady activity and then there would be a very abrupt and intense upswing in activity. Suddenly there was an event that everyone had to respond to and there was an explosion in the amount of online activity.

“There arises a collective behaviour between people who otherwise do not know each other, but who are coupled together via events in society,” explains Joachim Mathiesen.
The analysis also took into account how frequently approximately 100 international brands, like Pepsi, IBM, Apple, Nokia, Toyota, etc. occurred in messages on Twitter. Here too, the level is characterised by days of steady activity, which is interrupted by sudden, but brief explosions of activity.

“Something happens that encourages people to write on Twitter, and suddenly the activity explodes. This is a kind of horde behaviour that is driven by an external even and gets crowds to react,” says Joachim Mathiesen.

But why is a physicist concerning himself with social behaviour?

“As physicists, we are good at understanding large amounts of complex data and we can create systems in this sea of coincidences. Complex systems are seen in many contexts and are simply learning about human behaviour in large social groups,” he explains.
The model calculations shed light on the statistical properties of large-scale user activity on Twitter and the underlying contexts. Similarly, he analysed the fluctuations in the activity of trading shares on the financial market.

“We saw prolonged intervals with steady activity, after which there was sudden and almost earthquake like activity. An even starts an avalanche in the trading. Statistically, we see the same characteristic horde behaviour in the financial markets as we do on Twitter, so the two social systems are not that different,” concludes Joachim Mathiesen.