A star is formed when a large cloud of gas and dust condenses and eventually becomes so dense that it collapses into a ball of gas, where the pressure heats the matter, creating a glowing gas ball – a star is born. New research from the Niels Bohr Institute, among others, shows that a young, newly formed star in the Milky Way had such an explosive growth, that it was initially about 100 times brighter than it is now. The results are published in the scientific journal, Astrophysical Journal Letters. 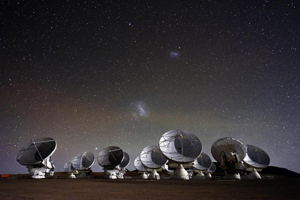 The young star was formed within the past 100,000 years in our own galaxy, the Milky Way. Using the large international telescope, the Atacama Large Millimeter Array (ALMA) in northern Chile, an international research team led by Jes Jørgensen from the Niels Bohr Institute studied the star and its surroundings.

“We studied the chemistry of the gas and dust cloud surrounding the early protostar (an early stage of star formation). In this dense cloud, a chemical reaction takes place that enables the formation of several kinds of complex molecules, including methanol. One would expect that all of the molecules would be near the star, but with one of them we saw a clear ring structure. Something had removed a certain molecule, HCO+, from a wide area around the protostar, explains astrophysicist Jes Jørgensen, Associate Professor at the Niels Bohr Institute and the Centre for Star and Planet Formation at the University of Copenhagen, Denmark.

He explains that what is special about the HCO+ molecule is that it is particularly sensitive to water vapour. Even small amounts of water vapour dissolve the molecule and the absence of HCO+ molecule can be used to discover what happened during the star formation process.

Violent eruption of light and heat

At first, the gas and dust cloud is extremely cold and simple molecules such as carbon monoxide and water settle on the grains of dust and solidify into ice. Here, where the molecules are close to each other, they bond together to form more complex molecules like methanol, ethanol, simple sugars, etc. and water in the form of ice. The gravity of the early protostar attracts much of the surrounding gas and dust cloud and when the material falls close to the young star, it slows down and the energy is converted into heat. This heat melts the ice, which turns into water vapour. 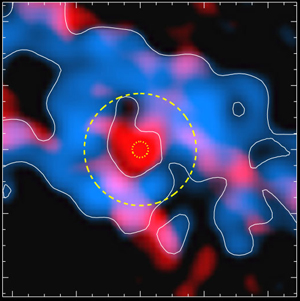 The picture shows the young protostar in the center surrounded by the gas and dust cloud. The red color shows the organic molecule, methanol, for which the radiation is concentrated close to the center. The blue color shows the HCO+ molecule with a clear extended ring-structure. The inner yellow ring is an indication where the temperature is 100 degrees above the absolute zero (-173 C) with the current luminosity of the star while the outer yellow ring shows where this temperature was reached when the star was a hundred times brighter. (Credit: Jes Jørgensen (Niels Bohr Institute).

“From the area where the HCO+ molecule has been dissolved by water vapour we can now calculate how bright the young star has been. It turns out that that the area is much greater than expected compared to the star’s current brightness.  The protostar has been up 100 times brighter than the star is now. From the chemistry we can also say that this change happened within the last 100-1000 years – that is to say, very recently from an astronomical point of view,” explains Jes Jørgensen.

Such an eruption of hot brightness can also explain the content of condensed methanol and the high content of molecules with carbon, as found in the gas cloud. This could also have a great influence on the chemical processes that lead to the formation of complex organic molecules that can later be incorporated into planetary systems. Jes Jørgensen believes that there has not only been a single burst of light and heat radiation, but that it could happen several times during the formation process.

“One of the major questions if we take a long view, is whether this is a common phenomenon – whether all young stars undergo similar ‘eruptions’ and if so, how often,” wonders Jes Jørgensen, who as a scientist is always on the hunt to solve more of the mysteries of the universe.

Read more on the topic at Cornell University's webpage