Greenland ice cores reveal warm climate of the past

In the period between 130,000 and 115,000 years ago, Earth’s climate was warmer than today. But how much warmer was it and what did the warming do to global sea levels? – as we face global warming in the future, the answer to these questions is becoming very important.  New research from the NEEM ice core drilling project in Greenland shows that the period was warmer than previously thought. The international research project is led by researchers from the Niels Bohr Institute and the very important results are published in the prestigious scientific journal, Nature. 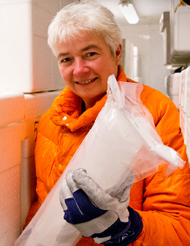 Dorthe Dahl-Jensen with an ice core from the Greenland ice cap. The ice cores from the NEEM project are kept in a freezer at the Niels Bohr Institute.

In the last million years the Earth’s climate has alternated between ice ages lasting about 100,000 years and interglacial periods of 10,000 to 15,000 years. The new results from the NEEM ice core drilling project in northwest Greenland, led by the Niels Bohr Institute at the University of Copenhagen show that the climate in Greenland was around 8 degrees C warmer than today during the last interglacial period, the Eemian period, 130,000 to 115,000 years ago.

“Even though the warm Eemian period was a period when the oceans were four to eight meters higher than today, the ice sheet in northwest Greenland was only a few hundred meters lower than the current level, which indicates that the contribution from the Greenland ice sheet was less than half the total sea-level rise during that period,” says Dorthe Dahl-Jensen, Professor at the Niels Bohr Institute, University of Copenhagen, and leader of the NEEM-project. 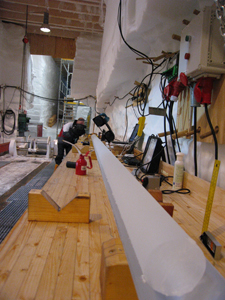 The NEEM ice core drilling project in northwest Greenland is an international project led by the Centre for Ice and Climate at the Niels Bohr Institute. For four years the researchers have drilled ice cores through the entire 2½ kilometer
thick ice sheet and obtained new groundbreaking knowledge about the past warm climate period called the Eemian.

Past snow reveals knowledge about the climate

The North Greenland Eemian Ice Drilling project or NEEM, led by the Niels Bohr Institute, is an international project with participants from 14 countries. After four years of deep drilling, the team has drilled ice cores through the more than 2.5 kilometer thick ice sheet. The ice is a stack of layer upon layer of annual snow fall which never melts away, and as the layers gradually sink, the snow is compresses into ice. This gives thousands of annual ice layers that, like tree rings, can tell us about variations in past climate from year to year.

The ice cores are examined in laboratories with a series of analyses that reveal past climate. The content of the heavy oxygen isotope O18 in the ice cores tells us about the temperature in clouds when the snow fell, and thus of the climate of the past. The air bubbles in the ice are also examined. The air bubbles are samples of the ancient atmosphere encased in the ice and they provide knowledge about the air composition of the atmosphere during past climates. 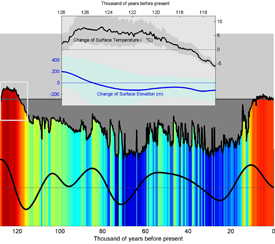 The climate graph shows the temperature from the previous warm interglacial period, the Eemian (left) throughout the entire ice age to present time. The blue colours indicate ice from a cold period, the red colour is ice from a warm period and yellow and green is from the climate period in between. The new results show that during the Eemian period 130,000 to 115,000 years ago the climate in Greenland was around 8 degrees C warmer than today.

The top shows a graph of ice sheet surface temperature and altitude. At the beginning of the Eemian, 128,000 years ago, the ice sheet in northwest Greenland was 200 meters higher than today, but during the warm Eemian period the ice mass regressed, so 122,000 years before now the surface had sunk to a level of 130 meters below the current level. During the rest of the Eemian the ice sheet remained stable at the same level with an ice thickness of 2,400 meters.

The researchers have obtained the first complete ice core record from the entire previous interglacial period, the Eemian, and with the detailed studies have been able to recreate the annual temperatures – almost 130,000 years back in time.

“It is a great achievement for science to collect and combine so many measurements on the ice core and reconstruct past climate history. The new findings show higher temperatures in northern Greenland during the Eemian than current climate models have estimated,” says Professor Dorthe Dahl-Jensen, Niels Bohr Institute.

Intense melting on the surface

During the warm Eemian period, there was intense surface melting that can be seen in the ice core as layers of refrozen meltwater. Meltwater from the surface had penetrated down into the underlying snow, where it once again froze into ice.

Such surface melting has occurred very rarely in the last 5,000 years, but the team observed such a melting during the summer of 2012 when they were in Greenland. 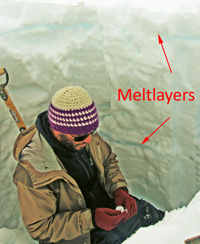 During the summer of 2012 there was melting on the surface of the NEEM camp. Meltwater from the surface penetrated down into the underlying snow, where froze into ice again. During the warm Eemian period there was an intense surface melting and the warming that is predicted to happen over the next 50-100 years could potentially result in similar climatic conditions to the Eemian.

“We were completely shocked by the warm surface temperatures at the NEEM camp in July 2012,” says Professor Dorthe Dahl-Jensen. “It was even raining and just like in the Eemian, the meltwater formed refrozen layers of ice under the surface. Although it was an extreme event the current warming over Greenland makes surface melting more likely and the warming that is predicted to occur over the next 50-100 years will potentially have Eemian-like climatic conditions,” she believes.

“The good news from this study is that the Greenland ice sheet is not as sensitive to temperature increases and to ice melting and running out to sea in warm climate periods like the Eemian,as we thought” explains Dorthe Dahl-Jensen and adds that the bad news is that if Greenland’s ice did not disappear during the Eemian then Antarctica must be responsible for a significant portion of the 4-8 meter rise in sea levels that we know occurred during the Eemian.

This new knowledge about past warm climates may help to clarify what is in store for us now that we are facing a global warming.