More hurricane surges in the future

By examining the frequency of extreme storm surges in the past, previous research has shown that there was an increasing tendency for storm hurricane surges when the climate was warmer. But how much worse will it get as temperatures rise in the future? How many extreme storm surges like that from Hurricane Katrina, which hit the U.S. coast in 2005, will there be as a result of global warming? New research from the Niels Bohr Institute show that there will be a tenfold increase in frequency if the climate becomes two degrees Celcius warmer. The results are published in the scientific journal, Proceedings of the National Academy of Science, PNAS.

The extreme storm surge from Superstorm Sandy in the autumn 2012 flooded large sections of New York and other coastal cities in the region – here you see Marblehead, Massachusetts. New research shows that such hurricane surges will become more frequent in a warmer climate.

Tropical cyclones arise over warm ocean surfaces with strong evaporation and warming of the air. The typically form in the Atlantic Ocean and move towards the U.S. East Coast and the Gulf of Mexico. If you want to try to calculate the frequency of tropical cyclones in a future with a warmer global climate, researchers have developed various models. One is based on the regional sea temperatures, while another is based on differences between the regional sea temperatures and the average temperatures in the tropical oceans. There is considerable disagreement among researchers about which is best.

“Instead of choosing between the two methods, I have chosen to use temperatures from all around the world and combine them into a single model,” explains climate scientist Aslak Grinsted, Centre for Ice and Climate at the Niels Bohr Institute at the University of Copenhagen. 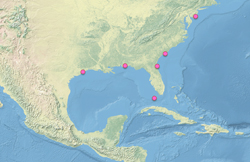 The study is based on data from monitoring stations along the U.S. Atlantic and Gulf coasts, where the daily tide levels have been recorded all the way back to 1923.

He takes into account the individual statistical models and weights them according to how good they are at explaining past storm surges. In this way, he sees that the model reflects the known physical relationships, for example, how the El Niño phenomenon affects the formation of cyclones. The research was performed in collaboration with colleagues from China and England.

The statistical models are used to predict the number of hurricane surges 100 years into the future. How much worse will it be per degree of global warming? How many ‘Katrinas’ will there be per decade?

Since 1923, there has been a ‘Katrina’ magnitude storm surge every 20 years.

10 times as many ‘Katrinas’

“We find that 0.4 degrees Celcius warming of the climate corresponds to a doubling of the frequency of extreme storm surges like the one following Hurricane Katrina. With the global warming we have had during the 20th century, we have already crossed the threshold where more than half of all ‘Katrinas’ are due to global warming,” explains Aslak Grinsted. 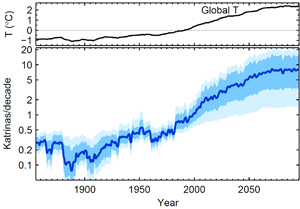 “If the temperature rises an additional degree, the frequency will increase by 3-4 times and if the global climate becomes two degrees warmer, there will be about 10 times as many extreme storm surges. This means that there will be a ‘Katrina’ magnitude storm surge every other year,” says Aslak Grinsted and he points out that in addition to there being more extreme storm surges, the sea will also rise due to global warming. As a result, the storm surges will become worse and potentially more destructive.