In the quest to find the most distant supernova, researchers have broken the record and observed a supernova that exploded more than 10 billion years ago.  This was in the early youth of the universe when it was evolving rapidly and stars were forming at a rapid pace. The discovery was made by the Hubble Space Telescope, with the involvement of researchers from the Niels Bohr Institute. The results are published in the scientific journal, Astrophysical Journal.

Supernovae are burned-out stars that explode in the process of dying out and flare up so powerfully that they can be observed across the entire universe. So these ‘lighthouses’ are very valuable for astronomers exploring the distant universe. In a three-year research programme, the Hubble has uncovered more than 100 supernovae. Supernovae are divided into different categories. In one category are giant stars that have more than 8 times the mass of our star, the Sun. When these giant stars die in a gigantic explosion it is called a Type II supernova and the vast majority of the observed supernovae are of this type. 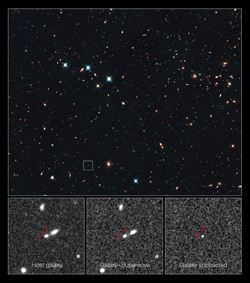 The supernova was found by repeatedly looking at the same part of the sky (the large image). The small images show how the host galaxy looked before (left)
and after (middle) the supernova exploded. If you subtract the left image from the middle image (right) you can see the supernova clearly. (NASA/ESA)

Another category of supernovae are Type Ia, which are two stars that orbit each other in a binary star system. Here the theory is that first one burns out and becomes a white dwarf, which then ‘sucks’ the other star’s mass towards itself and then at some point it explodes. These Type Ia supernovae are 5-10 times as powerful as Type II-supernovae and since they always have the same brightness, astronomers can use them to measure distances in the universe.

“It is really exciting, because we can begin to see whether the ages and distances that we use are different than expected,” explains Jens Hjorth, Professor at the Dark Cosmology Centre, Niels Bohr Institute at the University of Copenhagen.

A glimpse into the dawn of time

Looking so far back in time is at the limit of what the telescopes can handle. PhD student Teddy Frederiksen at the Dark Cosmology Centre at the Niels Bohr Institute explains that when the Hubble Telescope spotted the supernova, they could immediately see that here was something with a very high redshift, i.e. very far away. Using the special instrument, the X-shooter, on the giant VLT telescopes in Chile, they were able to make a spectrum, which clearly showed that it was a Type Ia supernova with the highest redshift (1,914) ever observed.

You are almost looking back to the dawn of time, when the first galaxies and stars were formed and when everything was different. The early universe was more compact. The universe is not just comprised of visible matter like stars, planets, galaxies and gas clouds, but also of large amounts of invisible matter, dark matter, which slows the expansion of the universe due to its gravity, and dark energy, which accelerates the expansion.

“The farther you look back in time the less dark energy there was. Using observations of distant supernovae, we can now begin to study the relationship between dark matter and dark energy and this can help us to understand whether dark energy behaves like Einstein’s cosmological constant, which is a model that can describe the accelerating universe, explains Teddy Frederiksen, though he points out that the exploration of the very young universe requires more supernovae than the one that has been spotted.


A supernova is one way that a star can end its life, exploding in a display of grandiose fireworks. One family of supernovae, called Type Ia supernovae, are of particular interest in cosmology as they can be used as standard candles to measure distances in the Universe and so can be used to calibrate the accelerating expansion that is driven by dark energy. One defining characteristic of Type Ia supernovae is the lack of hydrogen in their spectrum. Yet hydrogen is the most common chemical element in the Universe. Such supernovae most likely arise in systems composed of two stars, one of them being the end product of the life of sun-like stars, or white dwarfs. When such white dwarfs, acting as stellar vampires that suck matter from their companion, become heavier than a given limit, they become unstable and explode.