Researchers at the Niels Bohr Institute, together with colleagues in the US and Australia, have developed a method to control a quantum bit for electronic quantum communication in a series of quantum dots, which behave like artificial atoms in the solid state. The results have been published in the scientific journal Physical Review Letters. 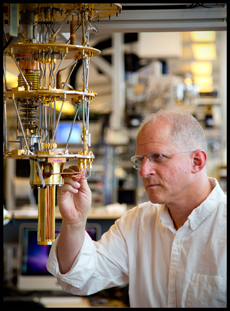 The experiments are carried out at ultra low temperatures close to absolute zero, which is minus 273 degrees C.

In a conventional computer, information is made up of bits, comprised of 0’s and 1’s. In a quantum computer the 0 and 1 states can simultaneously exist, allowing a kind of parallel computation in which a large number of computational states are acted upon by the machine at the same time. This can make a quantum computer exponentially faster than a conventional computer. The problem with the quantum world, however, is that you cannot allow these states to be measured, or all of the quantum magic disappears.

“We have developed a new way of controlling the electrons so that the quantum state can be controlled without measurement, using resonances familiar in atomic physics, now applied to these artificial atoms,” explains Professor Charles Marcus, director of the Center for Quantum Devices at the Niels Bohr Institute at the University of Copenhagen.

He explains that they are combining classical solid-state physics on a nanometer scale with resonance techniques of atomic physics. In a semiconducting material (GaAs) there are free electrons that move within the material structure. The information is stored in the spin of the electrons which can turn up or down. But the electrons and their spin must be controlled. 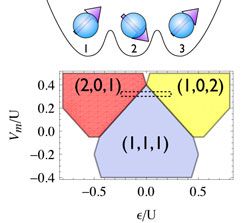 Schematic illustration of the actual ‘box’ with a triple quantum dot, where there is one single electron in each dot.

Captures electrons and controls them

“We capture the electrons in ‘boxes’. Each box consist of a quantum dot, which is an artificial atom. The quantum dots are embedded in the semiconductor and each quantum dot can capture one electron. There needs to be three quantum dots next to each other using nanometer-scale electrostatic metal gates. When we open contact between the ‘boxes’ the electrons can sense each others’ presence. The three spins must coordinate their orientations because it cost extra energy to put electrons with the same spin into the same box. To lower their energy, they not only spread out among the three boxes, but they orient their spins to further lower their energy. The three boxes together form a single entity – a qubit or quantum bit,” explains Charles Marcus.

An electrical signal is now sent from outside and by rapidly opening the boxes the system begins to swing in dynamic vibrations. The researchers can use this to change the quantum state of the electrons.

“By combining three electrons in a triple quantum dot and oscillating an applied electric field at the frequency that separates adjacent energy levels, we can thus control the spins of the electrons without measuring them,” explains Charles Marcus.

First, the technique itself was discovered. The next step is not just a single sequence with three quantum dots, but several sequences. Each sequence forms one qubit and now a series of qubits need to talk to each other. This could be realised by a quantum computer with more bits.

“The potential of a quantum computer is that it will be able to perform multiple calculations at once. In that way it will be much faster than conventional computers and will be able to solve tasks that cannot currently be solved, because it simply takes too long,” says Charles Marcus.

Quantum computers are not expected to be something everyone will own, but rather an advanced set of tools for researchers who need to make extreme calculations.

The research is described in three articles in Physical Review Letters: 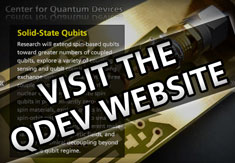