Researchers have been able to teleport information from light to light at a quantum level for several years. In 2006, researchers at the Niels Bohr Institute succeeded in teleporting between light and gas atoms. Now the research group has succeeded in teleporting information between two clouds of gas atoms and to carry out the teleportation – not just one or a few times, but successfully every single time. The results are published in the scientific journal, Nature Physics. 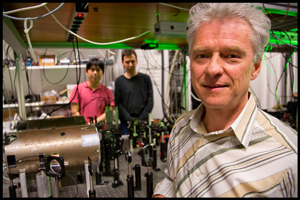 Professor Eugene Polzik in the quantum optics laboratory with the experiment setup in the background.

“It is a very important step for quantum information research to have achieved such stable results that every attempt will succeed,” says Eugene Polzik, professor and head of the research center Quantop at the Niels Bohr Institute at the University of Copenhagen.

The experiments are conducted in the laboratories of the research group in the basement under the Niels Bohr Institute. There are two glass containers, each containing a cloud of billions of caesium gas atoms.

The two glass containers are not connected to each other, but information is teleported from the one glass cloud to the other by means of laser light. The light is sent into the first glass container and then that strange quantum phenomenon takes place, the light and gas become entangled. The fact that they are entangled means that they have established a quantum link – they are synchronised. 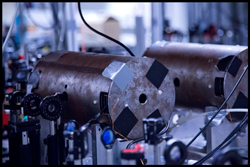 Both glass containers are enclosed in a chamber with a magnetic field and when the laser light (with a specific wavelength) hits the gas atoms, the outermost electrons in the atoms react –like magnetic needles – by pointing in the same direction. The direction can be up or down, and it is this direction that makes up quantum information, in the same way that regular computer information is made up of the numbers 0 and 1.

The gas now emits photons (light particles) containing quantum information. The light is sent on to the other gas container and the quantum information is now read from the light and registered by a detector. The signal from the detector is sent back to the first container and the direction of the atoms’ electrons are adjusted in relation to the signal. This completes the teleportation from the second to the first container.

The experiments are carried out at room temperature and the gas atoms therefore move at a speed of 200 meters per second in the glass container, so they are constantly bumping into the glass wall and thus lose the information they have just been encoded with. But the research group has developed a solution for this. 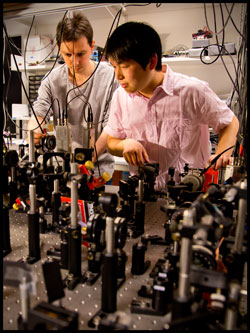 Daniel Salart Subils, Postdoc and Ph.D-student, Heng Shen are working on the experiments in the Quantum Optics Lab at the Niels Bohr Institute.

“We use a coating of a kind of paraffin on the interior of the glass contains and it causes the gas atoms to not lose their coding, even if they bump into the glass wall,” explains Professor Eugene Polzik. It sounds like an easy solution, but in reality it was complicated to develop the method. Another element of the experiment was to develop the detector that registers the photons. Here the researchers developed a particularly sensitive detector that is very effective at detecting the photons.  The experiments therefore works every single time.

But it is one thing to perform tests in a laboratory and quite another to apply it in wider society! In the experiment, the teleportation’s range is ½ meter – hardly impressive in a world where information must be transported around the world in no time.

“The range of ½ meter is entirely due to the size of the laboratory,” explains Eugene Polzik with a big smile and continues – “we could increase the range if we had the space and, in principle, we could teleport information, for example, to a satellite.” The stable results are an important step towards the quantum communication network of the future.