In order to develop future quantum computer networks, it is necessary to hold a known number of atoms and read them without them disappearing. To do this, researchers from the Niels Bohr Institute have developed a method with a trap that captures the atoms along an ultra thin glass fiber, where the atoms can be controlled. The results are published in the scientific journal, Physical Review Letters. 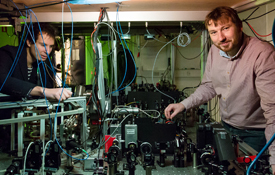 Jean Babtiste Béguin and Jürgen Appel in the quantum optics laboratory in the basement of the Niels Bohr Institute, where they did the experiments.

The research is carried out in the quantum optics laboratory in the basement of the Niels Bohr Institute in Copenhagen. The underground laboratory is set back from the road so there are no vibrations from traffic. Here, the researchers have designed experiments in which they can perform ultrasensitive trials with quantum optics.

“We have an ultra-thin glass fiber with a diameter of half a micrometer (a hundred times smaller than a strand of hair). Along this glass fiber we capture cesium atoms. They are cooled down to 100 micro Kelvin using a laser – this is almost absolute zero, which is equivalent to minus 273 degrees Celsius. This system acts like a trap that holds the atoms on the side of the glass fiber,” explains Jürgen Appel, Associate Professor in the research group Quantop at the Niels Bohr Institute, University of Copenhagen.

Atoms and light linked together 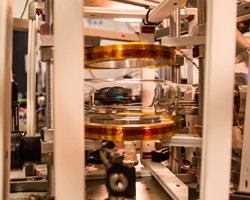 The experiment is carried out in a glass cell with very low pressure. In here is an ultra-thin glass fiber and a gas of cesium atoms. Using lasers and a magnetic field, the atoms are cooled down to almost absolute zero (minus 273 degrees Celsius) and the atoms gather as a cloud around the glass fiber. Then two laser beams with very different frequencies are transmitted into the fiber, thereby capturing atoms above the fiber surface. By measuring the difference in the speed of light for two other light beams on each side of the atoms’ absorption line, you can measure the number of atoms. (Credit: Niels Bohr Institute).

When light is transmitted through the glass fiber thread, the light will also move along the surface because the fiber is thinner than wavelength of the light. This creates strong interaction between the light and the atoms sitting securely above the surface of the fiber.

“We have developed a method where we can measure the number of atoms. We send two laser beams with different frequencies through the glass fiber. If there were no atoms on the fiber, the speed of light would be the same for both light beams. However, the atoms affect the two frequencies differently and by measuring the difference in the speed of light for the two light beams on each side of the atoms’ absorption lines, you can measure the number of atoms along the fiber. We have shown that we can hold 2,500 atoms with an uncertainty of just eight atoms,” says Jürgen Appel.

These are fantastic results. Without this method, you would have to use resonant light (light that the atoms absorb) and then you would scatter photons, which would kick the atoms out of the trap, says Jürgen Appel and explains that with this new method they can measure and control the atoms so that only 14 percent are kicked out of the trap and are lost.

“Our resolution is only limited by the natural quantum noise (the laser light’s own minimal fluctuations) so our method could be used for so-called entangled states of atoms along the fiber. Such an entangled system with strongly interacting atoms and light is of great interest for future quantum computer networks,” notes Jürgen Appel.