A layer of cells called endothelial cells lines the interior of blood vessels. When blood flows through the vessels, such cells only divide to replace dead cells. However, if there is a blood clot preventing blood from flowing across the endothelial cells, they begin to divide more actively. New research from the Niels Bohr Institute demonstrates that cell division is very ordered. The new cells move away from each other and create a dynamic movement with eddies in a large area. This presumably helps to widen the vessel around the blockage. The results are published in the prestigious journal Nature Communications

Living tissue is unlike other materials in that it is comprised of cells with a metabolism and the ability to divide and renew themselves. Normally in an adult body, cells only divide to form new cells to replace old, dead cells. But if there are abnormal conditions, the body can begin to form extraordinary new cells . 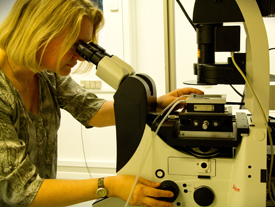 The blood vessel tissue is examined using phase-contrast microscopy, which makes it possible to follow the movements in the tissue, before, during and after cell division.

“If, for example, there is a blood clot blocking the flow of blood across the innermost layer of the endothelial cells, they begin to actively divide. But what happens in the tissue? How do the newly formed cells move in relation to each other – and which mechanisms control their movements? This is what we wanted to investigate,” explains biophysicist Lene Oddershede, head of the research group Optical Tweezers at the Niels Bohr Institute at the University Copenhagen.

The researchers investigated the dynamics of new cell formation in a layer of endothelial cells where there was no liquid flowing over. The investigations took place in a laboratory system that mimiced the conditions in an endothelial cell layer where a blood clot blocks the blood flow. In order to follow the movement of the cells and the dynamics of the tissue ‘live’ they used phase-contrast microscopy, which makes it possible to follow the movements in the tissue, before, during and after cell division.

“Our experimental studies showed that the tissue behaved like a viscous material. The endothelial cell layer is contiguous and the cells are in close contact with each other. When a cell has divided, the new cells move away from the point of origin and all the other cells follow this movement, which creates large, ordered and far-reaching eddies in the tissue,” says Lene Oddershede. 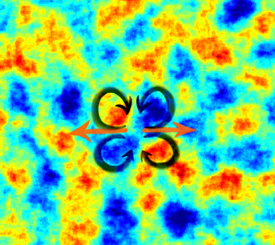 The blood vessel tissue is examined using phase-contrast microscopy, which makes it possible to follow the movements in the tissue, before, during and after cell division. (Niels Bohr Institute)

Lene Oddershede explains that well-ordered, far-reaching vortices are often a sign of turbulence, which is a normal phenomenon for fast movements in a flowing material with low viscosity like water, just like you also see in the characteristic turbulence patterns with ‘eddies’ in for example, weather satellite images of cloud formations. The big surprise with the tissue dynamics was that the researchers found these characteristic turbulence patterns with ‘eddies’ even though it was unexpected in such a slow and viscous system.

The research group has further supplemented the groundbreaking experimental results with theoretical modelling of the system and the modelling came up with the same results, providing a basic physical understanding of such a complex system as a blood vessel with a clot.

“This is a strong result, that both the experimental results and simulations  say that increased cell division may help tissue to grow and heal in a beneficial way and that this process is based exclusively on a physically-dependent diffusion, requiring no biological signalling. This may be important for healing around blood clots – and it is an example of nature’s ingenious ability to take care of itself,” explains Lene Oddershede.