Cells have finger-like projections that they use to feel their surroundings. They can detect the chemical environment and they can ‘feel’ their physical surroundings using ultrasensitive sensors. New research from the Niels Bohr Institute shows how the finger-like structures, called filopodia can extend themselves, contract and bend in dynamic movements. The results are published in the scientific journal, Proceedings of the National Academy of Sciences, PNAS. 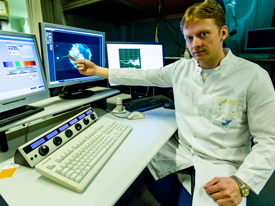 Poul Martin Bendix is showing finger-like structures, called filopodia, that are tube-like protrusions from the cell membrane. They can detect the chemical environment and they can ‘feel’ their physical surroundings using ultrasensitive sensors. (Credit: Ola Jakup Joensen, Niels Bohr Institute).

In many biological processes, cell interaction and communication with their environment are critical to their functioning. To feel their surroundings, the cells use finger-like structures that are actually tube-like protrusions from the cell membrane. These tubes are called filopodia and they can bring messages back to the cell about both the chemical environment and the physical surroundings. Fore example, the cells use the filopodia structures for correct development of the embryo, for growing nerve cells and when cells (like macrophages) need to migrate towards pathogenic bacteria in order to remove them.

“The filopodia structures are very dynamic and can both contract and elongate and bend actively in all directions. But what is it that allows them to move, how do they control their movements and what forces do they use? This is what we wanted to find out,” explains Poul Martin Bendix, Associate Professor in the research group BioComplexity at the Niels Bohr Institute, University of Copenhagen. 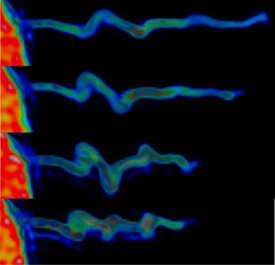 The image shows how the actin within the filopodia contracts while it forms a spiral-shaped structure. The actin inside the filopodium exhibits a marked rotational movement and when it contracts, it spiral-shaped folds form – just like when you twist an elastic band, holding tight to one end and pulling the other. (Credit: Niels Bohr Institute)

The researchers Natascha Leijnse, Lene Oddershede and Poul Martin Bendix studied the physical properties of filopodia using an optical trap, which is a microscope where you can hold onto and influence individual living cells using a highly focused laser while you observe, measure and follow their movements. 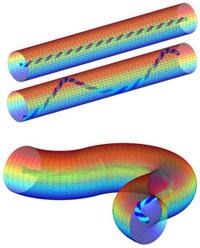 Computer simulations of filopodia dynamics indicate that a rotating actin structure inside the tube results in friction between the membrane and the actin, leading to the spiral form that is observed.

“In the experiment we grasped the ball sitting on the end of the filopodia antenna and pulled it with the ultrasensitive force microscope for up to 20 minutes. We could measure that the cells pulled back with a force of 1-100 piconewtons – the equivalent of the gravity on a single red blood cell. Furthermore, the study revealed a new mechanism that the filopodia use to move. We observed that the actin inside the filopodia exhibited a marked twisting motion and when it drew back, spiral folds were formed – just like when you twist an elastic band, holding tight to one end and pulling the other,” explains Poul Martin Bendix.

These spiral folds were filmed using fluorescence microscopy, all while measuring the contraction. The rotational mechanism that formed the spiral in the actin structure is important for making it possible for the filopodia to explore their environment by means of the rotary movement.

“These new results show a surprising new mechanism where rotation is converted into a mechanical feature that makes it possible for the cell to interact with neighbouring cells,” says Poul Martin Bendix.

The researchers studied the physical properties of filopodia using an optical trap, which is a microscope where you can hold onto and influence individual living cells using a highly focused laser while you observe, measure and follow their movements.

He explains that spiral-shaped structures are found everywhere in nature, for example, it the twisted DNA strand, as well as the hair-like cilia and flagella, which are a kind of rotating helix that give some bacteria and sperm cells the ability to swim.

Spiral-shaped filopodia were previously predicted in theory, but the predictions were based on a different mechanism for spiral formation. However, these spiral-shaped folds could also be proven theoretically by modelling a rotating actin structure inside a membrane tube.