Until now, rings of material in a disc have only been observed around giant planets like Jupiter, Uranus, Neptune and especially Saturn, which is known for its spectacular rings. Now astronomers from the Niels Bohr Institute, among others, have observed the first miniature planet with two rings of ice and pebbles. It is a smaller celestial body, called Chariklo, located two billion kilometers out in the solar system between Saturn and Uranus. The results are published in the prestigious scientific journal, Nature. 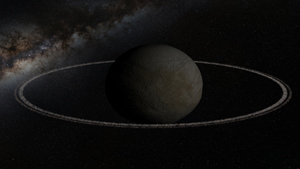 Chariklo is a comet like miniature planet located between Saturn and Uranus. It has a diameter of 250 km and new observations show that there are two rings of ice particles and pebbles. This is the first time such a small celestial body with rings has been observed. (Credit: ...)

Chariklo was located in the Kuiper Belt, a collection of thousands of dwarf planets and comets in orbit beyond Neptune on the edge of our solar system. But at some point it was thrown out of this belt and is now between Saturn and Uranus, where there is a collection of small objects, called Centaur. Chariklo is the largest of these objects with a diameter of 250 km. This comet like object has been known for many years, but despite careful study, its rings have never been observed before now. This has happened because a new camera is now being used on the Danish telescope at ESO's La Silla Observatory in Chile.

“The camera was specially developed at the Niels Bohr Institute and has a stunningly high resolution, which we especially exploit to look for exoplanets. But when the area where we are looking for exoplanets isn’t ‘up’ in the sky, we use our observation time for other projects and so we followed Chariklo, which just passed in front of a star,” explains Uffe Gråe Jørgensen, an astronomer in Astrophysics and Planetary Science at the Niels Bohr Institute at the University of Copenhagen. 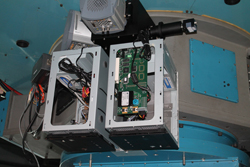 The special camera is Irish and the software programmes were specially developed over five years at the Niels Bohr Institute by three astronomers and two PhD students. It takes 40 images per second and the resolution is just as fantastic as if it was out in space. It is now sitting on the Danish telescope at the La Silla Observatory in Chile. The main purpose of the camera is to observe exoplanets, which are planets orbiting a star other than the Sun, but the sensitive camera has also shown its strength for making extremely precise observations of other objects. (Photo: Jesper Skottfelt, NBI)

“We were not even looking for rings, because they had never been observed around small objects like Chariklo, so it is a totally surprising discovery. The entire passage only lasted 5 seconds, but we could even determine incredible details about the rings. There are two separate thin rings, which are comprised of ice particles and pebbles. The two rings are only 3 and 7 km wide and no more than a few hundred meters thick. There are 14 km between the centers of the two rings and there is a 9 km wide gap between them. They have been measured at a distance of two billion kilometers with an accuracy of plus/minus a few hundred meters. It is really impressive,” says Uffe Gråe Jørgensen.

How the rings were formed is a mystery, but Uffe Gråe has a clear theory.
“What we are witnessing is perhaps the unveiling of an object that is in the middle of the same stage of development as the Earth and the Moon 4.5 billion years ago, when there was a giant collision between Earth and another planet. In the collision, material hurled out in all directions, forming a circular disc around the Earth, which gradually condensed  and formed the Moon. Similarly, we believe that another celestial body crashed into Chariklo and a good deal of material was cast out and formed rings. If the two discs around Chariklo gathers and forms a moon, it will be approximately 2 km in diameter,” explains Uffe Gråe.

The picture shows the difference in resolution with a normal CCD (left) and whar you can achieve with a EMCCD camera (right) in the same observation time.

In addition to the observations with the Danish telescope at La Silla Observatory in Chile, Chariklo was also followed in lower time resolution from six other observatories in South America, which together made it possible to determine Chariklo’s shape and size. There were only a few minutes of observations in total, but the result was the breakthrough revelation of the comet like miniature planet Chariklo with the two rings.