Mars was a habitable planet with flowing water – studies by NASA’s Mars rover Curiosity have already shown this. But has there been life? – and when a manned mission is ever sent to Mars, how will the astronauts get oxygen to breathe when they are out there? That is what the next mission, Mars-2020, will try to find out and the mission has Danish participation from the Mars Group at the Niels Bohr Institute.

NASA’s Mars missions have the participation of any prominent research institutes from around the world, though most from the United States, but also Europe, and there is great interest in getting the opportunity to participate. NASA received 58 proposals for experiments and experiment designs from researchers and engineers around the world. That was twice as many as in past missions. Danish researchers from the Niels Bohr Institute made two proposals for the experiments, Mastcam-Z and MOXIE.

“When we were invited to participate in the MOXIE experiment and I asked the head of the project, Mike Hecht, why we were chosen, he replied: “because you have the expert knowledge we need and because you are experienced with space missions,” explains Morten Bo Madsen, head of the Mars Group at the Niels Bohr Institute at the University of Copenhagen. 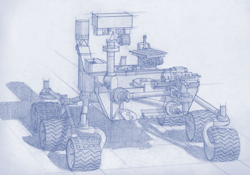 The Mars 2020 rover will be based on the design of the very successful Mars Science Laboratory rover, Curiosity, which landed about two years ago and is still in operation and very active on Mars. The new rover will bring more sophisticated and upgraded technical equipment and new instruments to conduct geological surveys and will try to determine the habitability of the environment as well search for evidence of prehistoric life. (NASA, artist rendering)

And Morten Bo Madsen and his research group have experience with space missions. They participated in Mars Pathfinder in 1997, Spirit and Opportunity in 2004, Phoenix Mars Lander in 2008 and Mars Science Laboratory with the rover, Curiosity, which landed in August 2012.

The Mars Group is working experimentally with the exploration of the Martian surface. In particular, they have studied the airborne dust and the experiments are based on the instruments that the group have designed and built for the Mars lander missions.

The instruments NASA has chosen for the 2020 rover has just been made public and the Danish research group will be involved in the work on two of them.

“We will work on the stereo camera that sits on the mast, Mastcam-Z, which can both see far out into the terrain and can zoom in and capture close-ups. It has to look both at the dust in the air and stones on the surface. Our task will be to assist with calibration so that the images are realistic and scientifically sound. Kjartan Kinch from the Danish research group has unique knowledge about how to best compensate for the dust that is everywhere on Mars when the images need to be calibrated. The calibration is performed using a special calibration target, which has some very well characterized spots of colour for colour fine-tuning and some built-in magnets that can collect the dust and keep the area used for calibration clear of dust. It will possibly be us who will design and produce this calibration device,” explains Morten Bo Madsen. 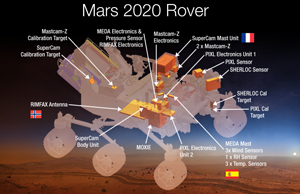 The Mars 2020 rover will bring seven instruments for scientific investigations. Mastcam-Z, a stereo camera. SuperCam, an advanced instrument with spectrometers and the ability to detect organic compounds. MOXIE, which will produce oxygen from atmospheric CO2. MEDA, a meteorological station. RIMFAX, which is a radar that can see up to 500 meters underground. There will be two instruments on the arm, PIXL for elemental analysis and SHERLOC, which is a UV spectrometer. (NASA)

The second experiment that the Danish research group will work with has been named MOXIE, which stands for Mars Oxygen Insitu Resource Utilization Experiment.

“MOXIE is an instrument designed to produce oxygen from CO2, which is in the atmosphere. There is almost no oxygen in the Martian atmosphere, so the ability to produce oxygen is preparation for manned missions to Mars, where people will need to be able to breath and get the necessary oxygen. In addition, the oxygen could be used for a return rocket to travel back to Earth again,” explains Morten Bo Madsen.

He explains that MOXIE is a kind of reverse fuel cell. A fuel cell produces energy through a chemical reaction that fuses hydrogen and oxygen into water. In the ‘reverse’ fuel cell, energy (from a radioactive power generator on the rover) is used to separate CO2 into oxygen (O2) and CO (carbon monoxide).

The Mars 2020 rover will also take core samples of the subsurface and here the goal is to find deposits that could contain fossils, i.e. imprints of, for example, microbes in stone. The idea is that the samples will be stored on Mars so that they can be brought to Earth by a later mission.

The Mars 2020 rover will be launched in July/August 2020 and the journey to Mars will take 7-9 months. According to the plan, the rover will conduct experiments for a Mars year (just under two Earth years). The Mars group with Morten Bo Madsen at the helm will thus help with planning the scientific experiments to be conducted on the red planet.