The climate is getting warmer, the ice sheets are melting and sea levels are rising – but how much? The report of the UN’s Intergovernmental Panel on Climate Change (IPCC) in 2013 was based on the best available estimates of future sea levels, but the panel was not able to come up with an upper limit for sea level rise within this century. Now researchers from the Niels Bohr Institute and their colleagues have calculated the risk for a worst-case scenario. The results indicate that at worst, the sea level would rise a maximum of 1.8 meters. The results are published in the scientific journal Environmental Research Letters. 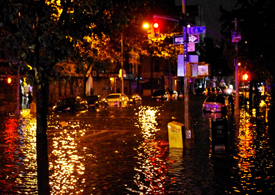 What causes the sea to rise is when all the water that is now frozen as ice and lies on land melts and flows into the sea. It is first and foremost about the two large, kilometer-thick ice sheets on Greenland and Antarctica, but also mountain glaciers.

Finally, what happens is that when the climate gets warmer, the oceans also get warmer and hot water expands and takes up more space. But how much do the experts expect the sea levels to rise during this century at the maximum?

Melting of the ice sheets

“We wanted to try to calculate an upper limit for the rise in sea level and the biggest question is the melting of the ice sheets and how quickly this will happen. The IPCC restricted their projektions to only using results based on models of each process that contributes to sea level. But the greatest uncertainty in assessing the evolution of sea levels is that ice sheet models have only a limited ability to capture the key driving forces in the dynamics of the ice sheets in relation to climatic impact,” Aslak Grinsted, Associate Professor at the Centre for Ice and Climate at the Niels Bohr Institute at the University of Copenhagen 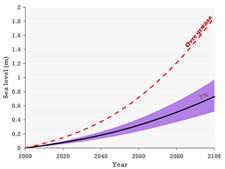 The worst-case sea level projections is shown in red. There is 95% certainty that sea level will not rise faster than this upper-limit. Purple shows the likely range of sea level rise as projected in the IPCC fifth assessment report under a scenario with rising emissions throughout the 21st century (RCP8.5). (Credit: Aslak Grinsted, NBI)

Aslak Grinsted has therefore, in collaboration with researchers from England and China, worked out new calculations. The researchers have combined the IPCC numbers with published data about the expectations within the ice-sheet expert community for the evolution, including the risk for the collapse of parts of Antarctica and how quickly such a collapse would take place.

“We have created a picture of the propable limits for how much global sea levels will rise in this century. Our calculations show that the seas will likely rise around 80 cm. An increase of more than 180 cm has a likelihood of less than 5 percent. We find that a rise in sea levels of more than 2 meters is improbable,” Aslak Grinsted, but points that the results only concern this century and the sea levels will continue to rise for centuries to come.