New research shows that human pollution of the atmosphere with acid is now almost back to the level that it was before the pollution started with industrialisation in the 1930s. The results come from studies of the Greenland ice sheet and are published in the scientific journal, Environmental Science and Technology.

The ice is drilled in Greenland and Antarctica and is transported back home to the laboratory where it is prepared and made ready the measurements. (Credit: Paul Vallelonga, NBI)

The Greenland ice sheet is a unique archive of the climate and atmospheric composition far back in time. The ice sheet is made up of snow that falls and never melts, but rather remains year after year and is gradually compressed into ice. By drilling ice cores down through the kilometre-thick ice sheet, the researchers can analyse every single annual layer, which can tell us about past climate change and concentration of greenhouse gases and pollutants in the atmosphere. 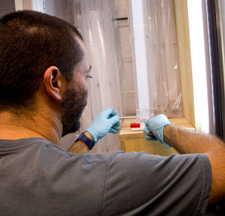 The ice is cut out and melted on a warm melting head. The new method measures the meltwater directly and the data can already be analysed a few seconds after melting the ice. (Credit: Ola Jakup Joensen, NBI)

Acid in the atmosphere can come from large volcanic eruptions and manmade emissions from industry. You can measure acidity in the ice by simply passing an instrument that can measure conductivity over the ice core. If there is a high level of acidity, the measurement turns out and it works great for measuring the climate of the past all the way back to the last interglacial period 125,000 years ago. But if you want to measure atmospheric acidity for the last 100 years, it is more difficult as the annual layers are located in the uppermost 60 metres and there the ice is more porous as it has not yet been compressed into hard ice.

Measures pollution from year to year

But the last 100 years are interesting for climate researchers as it is the period where we have had massive pollution of the atmosphere from industrialisation, vehicle use and people’s energy consuming lifestyles.

“We have therefore developed a new method that can directly measure the acidity of the ice using a spectrometer. We have an ice rod that is cut along the length of the ice core. This ice core rod is slowly melted and the meltwater runs into a laboratory where they take a lot of chemical measurements. With our new method you can also measure the acidity, that is to say, we measure the pH value and this is seen when the water changes colour after the addition of a pH dye. We can directly see the fluctuations from year to year,” explains Helle Astrid Kjær, postdoc in the Centre for Ice and Climate at the Niels Bohr Institute, University of Copenhagen. 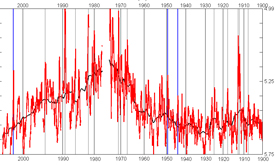 For many years, there has been a quest to solve the problem of measuring acidity in the porous annual layers of the ice and now scientists from the Niels Bohr Institute have succeeded. The method is a Continuous Flow Analyses or CFA method and it was originally invented in Switzerland, but Helle Astrid Kjær has spearheaded the further development of the system so it can also measure acid.

Distinguishes between natural and manmade sources

In addition to being able to measure the pH value more accurately using the new method, the CFA system can also distinguish whether the emissions come from volcanic eruptions, large forest fires or industry. The researchers can therefore filter out both volcanic eruptions and forest fires in the assessment of industrial pollution and the new results are revolutionary. 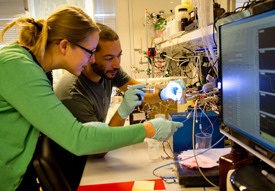 Helle Astrid Kjær and Paul Vallelonga in the CFA (Continuous Flow Analysis) ice core laboratory, where they melt ice cores and study what the impurities tell us about past climate. (Credit: Ola Jakup Joensen, NBI)

“We can see that the acid pollution in the atmosphere from industry has fallen dramatically since manmade acid pollution took off in the 1930s and peaked in the 1960s and 70s. In the 1970s, both Europe and the United States adopted the ‘The clean air act amendments’, which required filters in factories, thus reducing acid emissions and this is what we can now see the results of. The pollution of acid in the atmosphere is now almost down to the level it was before the pollution really took off in the 1930s, explains Helle Astrid Kjær.

The new pH method has already been used on ice cores from Greenland and Antarctica by research teams from New Zealand, the United States and Denmark.