Cancer treatment on a cellular level

The most common treatments for cancer are radiation and chemotherapy. However they have side effects and also damage healthy tissues. Moreover, their effectiveness is limited when the cancer has spread through out the body. Researchers at the Niels Bohr Institute are therefore working to develop a gentler treatment that ‘tricks’ the cancer cells, which would absorb a cytotoxin and therefore be destroyed, while healthy cells would remain unaffected. The results are published in the scientific journal, Scientific Reports. 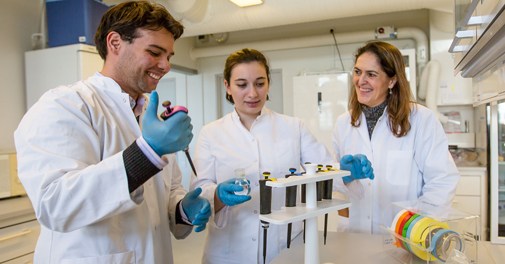 Physicist Murillo Martins at the Niels Bohr Institute at the University of Copenhagen had an idea. He wanted to construct a kind of nanoscale ‘lorry’ that could transport the cytotoxin directly to the cancer cells via the bloodstream and would prompt the cells to let the ‘load’ in so that the cancer cells were destroyed. It is something you could imagine in a science fiction film, but could it be done in the real world?

The first task was the ‘vehicle’ itself. For that he decided to use tiny magnetic beads, an approach well known in medical research. You can inject the beads into the bloodstream and by placing a magnet at the site where the tumour is located you can get the beads to move there. The next step was the cytotoxic load. 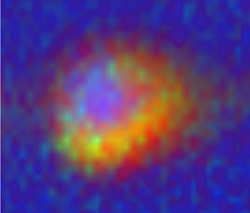 The nanoparticle is approximately 5-600 nanometers in diameter (a nanometer is a millionth of a millimeter). Innermost is the magnetic bead. In the surrounding ring is the biological base material with the encapsulated cytotoxin (yellow dots). The image was obtained at the Paul Scherrer Institute in Switzerland. (Credit: Bordallo and Martins, Niels Bohr Institute)

“We designed a ring-shaped sac of a biologically useful base material and using chemical processes we encapsulated the cytotoxin surrounding the beads. The coupling does not always happen, but using a separation process we can sort the beads from where the coupling with the sac did not succeed,” explains Murillo Martins, a postdoc in X-Ray and Neutron Science at the Niels Bohr Institute, University of Copenhagen.

At the neutron scattering facility LANSCE in the US and the synchrotron facility at the Paul Scherrer Institute, PSI in Switzerland, they could ‘look inside’ the package with the cytotoxin and confirm that the cytotoxin was encapsulated in the ring-shaped package.

Doorways into the cell

The next problem to be solved was to get the package into the cell. A cell has a surrounding membrane that protects the cell against foreign substances. But it also has keyholes or receptors that can open up if the cell wants to let a substances enter. These substances must have a key that fits into the keyholes.

“Then I thought, why do breast cancer, lung cancer and ovarian cancer so often spread to the bones? Bones are composed of minerals like calcium phosphates. Do cancer cells need these substances to grow? Can these substances be used as doorways to the cell? I decided to investigate this,” explains Murillo Martins. 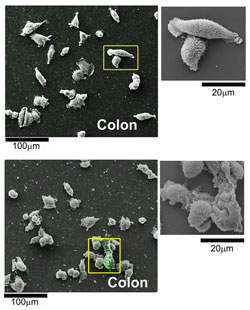 Above picture: The cancer cells that have not been treated have an elongated shape. Picture below: The cancer cells have absorbed the packages with cytotoxin and show signs that they are about to die. The green spots show regions with high concentration of the packages. (Credit: Bordallo and Martins, Niels Bohr Institute)

They carried out experiments with breast cancer, lung cancer and colon cancer cells along with healthy cells (monocytes and fibroblasts) at the Laboratory of Tumour Immunology at the  School of Bioscience in Botucatu, Brazil.

The studies showed that the cancer cells actually absorbed the packages with the cytotoxin. But what kind of effect would they have? Cancer cells and healthy cells have very different metabolisms and the two types of cells responded differently to the encapsulated anti-cancer agents.

“We could see that the nanoparticles with the cytotoxin were absorbed by the cancer cells. This caused the metabolism of the cancer cells to change and the cells showed signs that they were about to die. The healthy cells, meanwhile, do not show any evidences of absorbing the packages with the cytotoxin. This suggests that the method can be used to send cytotoxin around the body with reduced toxicity and could therefore be potentially safer for healthy cells,” explains Heloisa Bordallo, Associate Professor in X-Ray and Neutron Science at the Niels Bohr Institute.