We humans are affecting nature to a greater and greater degree and this is contributing to the reduction of biodiversity globally. To better assess the consequences requires a better understanding of the environmental conditions that the species in an ecosystem live under. A group of biophysicists from the Niels Bohr Institute have therefore analysed data and calculated how the species in an area affect each other and how an ecosystem can be in balance or out of balance. The results are published in the scientific journal, PLoS Computational Biology. 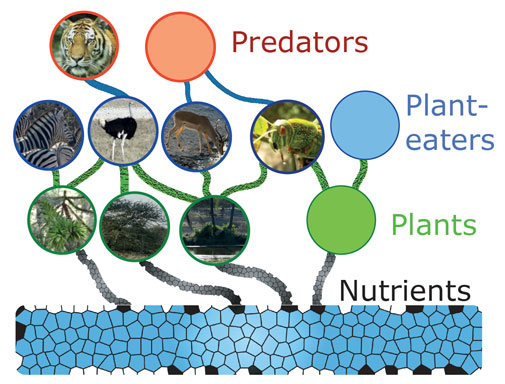 Specific food web formed by plants, plant eaters and top predators and their feeding connections. Plants are capable of using basic chemical or physical nutrients to live and reproduce, this means there is a flow of energy from the nutrients to the plants. Plant-eating animals may live exclusively on the available plants while top predators feed on other animals. (Credit: Jan Härter, Niels Bohr Institute)

In nature, animals move around and encroach into new areas where other animals have their habitat.   Here they might be predators for some of the original animals and they can also be eaten themselves. They are all part of the food chain. This pattern of eating and being eaten can be in balance or it can lead to disturbances in the environment, for example when rabbits were introduced in Australia and the rabbits multiplied dramatically, as they had no natural enemies.

But how do you know if an ecosystem is in balance? Can you even formulate it? Yes, a group of biophysicists from the Niels Bohr Institute has done it. The formula is called Lotka-Volterra and it is used to calculate the mutual influence, which is a key factor in a sustainable coexistence. 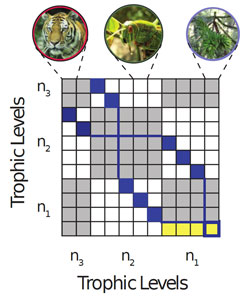 Mathematically, coexistence means that a path through the interaction matrix, formed by all species in the food web, can be found. The figure visualizes an example interaction matrix, with white boxes connecting neighbor trophic levels contain non-zero elements. The path consists of using the combination of a given row and column only once, as shown by blue boxes. The connections to the nutrient source, shown by yellow, which feeds all species at the bottom layer, can - but need not – be used as a part of the path. In the given case, there are 4 basal species, e.g. plants, 5 plant eaters, and 2 top predators. . (Credit: Jan Härter, Niels Bohr Institute)

“We have used data from biological observations and analysed the relationship between the different species and their place in the food chain. Some species eat plants, while others eat other animals. We can see that it is extremely important that there is a balance between who eats what and how many are hunting the same prey,” explains Namiko Mitarai, Associate Professor of biophysics at the Niels Bohr Institute at the University of Copenhagen. She, along with Assistant Professor Jan Härter and Professor Kim Sneppen, both from the research group Biocomplexity at the Niels Bohr Institute, performed the comprehensive statistical calculations.

Namiko Mitarai explains that they first used the classical calculations from the theories about ecosystems that say that two predators cannot exist simultaneously if they both live exclusively on the same prey. But in their analysis, they have modified the mutual competition by saying that the two competing predators might well exist side by side, if only they are prey for other predators.

Predators may also be prey

Whatever is eating grass is eaten by a carnivore, which is eaten by another carnivore and so on. If two species are chasing the same prey, it is important that the two species are also being hunted by other animals. Without it, one of the two species - say the one better at catching the pray, will eventually outcompete the other species because not enough pray is left for the other. But if the “better” species is also hunted by other animals, the “worse” species can have enough food to survive. Hence the “links” between species are very important.

What you can also see is the combination of species in the different links of the food chain. As you can also see in the data from field studies, it turns out that these ‘rules’ that predators have to be prey for other predators means that there are far more species in the middle part of the food chain than at the bottom and the top. In addition, the research shows that animals that are both herbivores and carnivores – so-called omnivores, may have a special role in stabilising the food chain as they combine several nutrient chains.

“In a larger perspective, our calculation method enables us to predict which types of invasive species can cause major changes and perhaps even the collapse of the ecosystem in a given area and the method could also be used to predict the later extinction of species due to the removal of native animals in the area,” explains Namiko Mitarai.