Deep Space is a project that will use a new specially designed telescope to look far into space in order to observe radiation from the early universe. The equipment will be placed at Summit in the middle of the Greenland ice sheet and now the first step has been taken in this scientific mission. 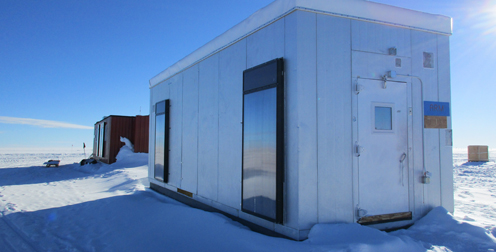 The laboratory with all the technical equipment and electronics is now in place at Summit in the middle of the Greenland ice sheet. This is the first step in the Deep Space project.

“The laboratory with the all the technical equipment and electronics is now in place at Summit, located in the middle of Greenland on the ridge of the more than three kilometre thick ice sheet. It has been a very difficult task because of the site’s remote location in the middle of the ice sheet and the difficult transportation conditions,” explains Pavel Naselsky, professor at the Niels Bohr Institute, University of Copenhagen. 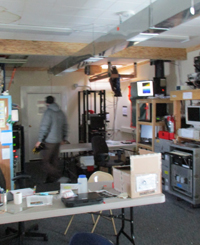 The laboratory with technical equipment and electronics is now ready.

But the location is crucial for the project, as the atmosphere over Greenland is very clear because of the cold and the very low humidity. These are optimal conditions for seeing far into space in order to observe light from the earliest universe and to look for traces of cosmic microwave background radiation. This radiation is an afterglow of the Big Bang and can provide unique information about the creation and evolution of the universe.

The research project is international and Pavel Naselsky is the scientific leader of the project. The next step in the project is to install the telescope in Greenland.

The telescope itself is a collaboration with the University of California, Santa Barbara in the United States, which is responsible fro the basic construction of the telescope, while Denmark will contribute by adapting the telescope so that it can function in the Arctic environment. 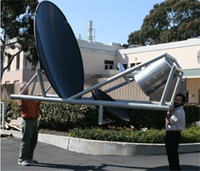 “The telescope is almost ready to installed. It has been tested at the University of California and we will install it next spring, when the extreme cold of winter subsides and the darkness is replaced by the return of the light. Shortly thereafter, we will be ready to begin the first observations,” says Pavel Naselsky, who describes the Deep Space project as the first project in Greenland involving fundamental space research.