Today it was announced that gravitational waves, a key prediction of Einstein’s theory of general relativity, have been directly detected for the first time and astrophysicists from the Niels Bohr Institute’s Dark Cosmology Centre have been involved in trying to find out where they came from.

The Laser Interferometer Gravitational-Wave Observatory (LIGO)1, the most recent generation of gravitational wave detection experiments, have finally caught the characteristic but minuscule squeezing and stretching of space that is a gravitational wave. These are literally ripples in spacetime, caused by a violent, asymmetric event out in space involving huge masses, such as the collision and final coalescence of black holes or neutron stars; the larger the mass, the more powerful the gravitational wave. Such waves have been sought for half a century, with ever more sensitive detectors being built. Their detection would constitute another major confirmation of general relativity. Today, LIGO announced that they had achieved this goal in September 2015.

“It’s so exciting,” said Darach Watson of the Dark Cosmology Centre, “they have started an entirely new way of looking at the universe. Everything we see from the distant universe comes to us as electromagnetic radiation – radio waves, visible light, X-rays. But this is something entirely new – waves in the fabric of spacetime. It’s an extraordinary time in the history of humanity.”

Astrophysicists at the Niels Bohr Institute’s Dark Cosmology Centre have been part of the international team engaged in the follow-up of gravitational wave sources using optical and near-infrared telescopes. While the gravitational wave experiment LIGO can determine the nature of the event and the mass of the sources from their characteristic ‘ring-down’ signatures, or ‘chirp’, they cannot readily determine their redshifts or locate their positions on the sky to any great accuracy.

This is where follow-up comes in. Some gravitational wave sources, such as those involving neutron star collisions, are expected to produce a faint glow of optical or infrared light for some days or weeks after the event. By finding such an afterglow, the precise location, galaxy, distance and environment of the event would be determined. International teams of astronomers specialising in transient signals, including a group at the Dark Cosmology Centre, agreed with the LIGO experimental team last year to take their very large and uncertain positions on the sky and hunt through them with wide area telescopes to try to find such afterglows. Scientists at the Dark Cosmology Centre are highly experienced in this area. They are world-leading in the field of gamma-ray burst follow-up and were part of the team that found the first afterglow of a neutron star merger in 20132. 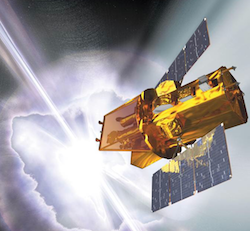 The Swift satellite is a versatile observatory which can provide X-ray and optical/UV observations.

The Dark Cosmology Centre is also involved in other follow-up through the Danish contribution to NASA’s Swift satellite3. Designed with an autonomous pointing capability, Swift can chase down new, transient phenomena in minutes and has also been part of the follow-up campaign at ultraviolet, X-ray and gamma-ray energies. “It’s been extremely valuable that Denmark has managed to get access to Swift,” said Daniele Malesani, another scientist at the Dark Cosmology Centre and a Swift specialist. “It allows us to be there first at X-ray and ultraviolet wavelengths too.”