The Earth’s climate has been warming, but even though the Greenland ice sheet is melting rapidly in the coastal regions, there are large parts of the ice sheet (40 percent) where there has hardly been any melting on the surface. A warmer climate usually also means that there is more precipitation, but there has been no increase in the amount of precipitation on the ice sheet. New research with participation of the Niels Bohr Institute shows that this is due to an insulating layer of air that forms near the surface during the winter, which insulates the ice sheet from the upper atmosphere and reduces both evaporation and precipitation. The results are published in the scientific journal, Science Advance.

Hans Christian Steen-Larsen pulls the equipment over the ice to the study site. (Credit: Max Berkelhammer, University of Illinois) 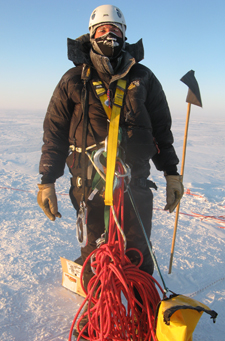 Because of low-lying clouds and driving snow, direct observations of the ice sheet surface can be very uncertain. Instead, an international team of researchers from the United States and the Niels Bohr Institute in Denmark have studied the atmosphere over the 3½ km thick ice sheet.

Finding answers in the air

“We decided to investigate whether you could find the answer in the atmosphere above the ice sheet by measuring the atmospheric processes directly. We therefore took measurements of the water vapour in the atmosphere for three years,” explains Hans Christian Steen-Larsen, a postdoc at the Centre for Ice and Climate at the Niels Bohr Institute at the University of Copenhagen.

Water consists of molecules with one oxygen atom and two hydrogen atoms. But the atoms can vary a bit and have more or fewer particles in the nucleus, which are called isotopes. The researchers measured the stable water isotopes in the water vapour in the atmosphere up to a height of 40 meters above the surface of the ice sheet. They analysed the water vapour and measured the ratio between the most common form of oxygen, 16O and the slightly heavier oxygen, 18O. This isotope ratio says something about where the water vapour came from and they got some very surprising results. 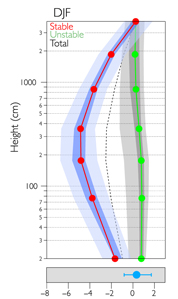 The curve at the isotopic composition of the water vapour between the snow surface and a height of 40 m shows that at a height of 2-4 meters there is a minimum of 18O. So there is a boundary layer that separates the lower layer and the upper layer in the atmosphere. (Credit: Berkelhammer et al.)

It turns out that that there are very stable weather systems in the atmosphere over the ice sheet during the winter. Close to the surface it is very cold and dry and the air is very stagnant. About 100 meters up, the air is more dynamic and warmer. But it is not a smooth transition.

This disconnect between the two layers explains why there is less precipitation than expected. Above the boundary layer, the air contains water and can form a fog, but because the fog is simply too thin and the particles are too small, the fog does not get dense enough to fall as precipitation, so it simply evaporates again. At the same time, the thin layer of fog puts a layer on the surface, preventing evaporation from the surface of the ice.

“We have simply discovered an important process that helps to explain why there is no relationship between temperature and precipitation on the Greenland ice sheet,” says Hans Christian Steen-Larsen.

The results were further tested by comparing them with data from ice cores. The Greenland ice sheet was formed by snow that falls year after year and remains and is gradually compressed into ice. By drilling ice cores through the kilometers thick ice sheet, researchers can clearly see each annual layer and they can measure what the temperature was in the precipitation that originally fell as snow. In this way, they can discover what the climate was like over more than a hundred thousand years – how warm it was and how much precipitation fell.

“If we look at the data from the last 11,000 years, where we have had a warm interglacial period, we can see that the temperature and the amount of precipitation have not always followed each other. This missing link has been difficult to explain, but we can now do this with our discovery of this phenomenon. This means that you can use data from the ice cores that tells us about past climate variations to improve the climate models for predicting future climate chance,” concludes Hans Christian Steen-Larsen.