Quantum physics is no longer theoretical thought experiments, it is real experiments in laboratories and the next step is to develop quantum technology for commercial use, such as quantum information technology. In a major new effort to translate quantum physics into practical quantum technology, the Innovation Fund Denmark has therefore invested 80 million kroner in a nationwide project involving three universities: the Niels Bohr Institute at the University of Copenhagen, the Technical University of Denmark, DTU and Aarhus University.

“Denmark is currently in the unique situation that we have some of the world’s leading researchers in experimental quantum technology. The Innovation Fund has decided to harness this unique Danish strength with a large-scale effort to create new business in this area and expects to bring Denmark to the forefront here. This will be done by creating a national centre with an initial two-year grant of 80 million kroner,” says Peter Høngaard Andersen, director of the Innovation Fund.

The Quantum Innovation Center, or Qubiz, as the new national center is called, is based at the Niels Bohr Institute at the University of Copenhagen, DTU and Aarhus University and has three participating foreign universities and 18 companies, of which 8 are foreign.

Quantum physics deals with the properties of matter on an atomic level and the laws of quantum physics are fundamentally different than those we know from ‘classical physics’, which describes the macroscopic world around us. In quantum physics, an atom or a photon can be in two different places at the same time, or two objects can be ‘entangled’, that is to say, if you measure the one object, then it immediately affects the other – even if it is far away.

It is these strange quantum phenomena that the researchers can now realise in their laboratories. In the Quantum Photonic research group at the Niels Bohr Institute, they are working to create a circuit based on light (photons) instead of electrons – that is photonics instead of electronics. 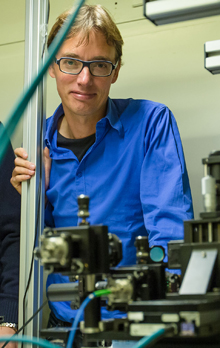 “There are great prospects for new information technology based on light (photons). We are working to create a quantum internet, where you will be able to encrypt messages that are completely unbreakable or which can be used to make gigantic calculations of large and complex problems that traditional computers do not have sufficient processing problems to solve,” says Peter Lodahl, professor and head of the Quantum Photonic research group at the Niels Bohr Institute.

But in order to create a network with photons you need to be able to control the transport of photons in a circuit. The researchers have developed a photonic chip with a quantum dot that emits one photon at a time, so you can control the direction of the photon. A new great achievement is that the quantum dot can be used as a contact for the photons – a kind of transistor. This is an important component for being able to create a complex network of photons.

“The photonic chip we have developed is very effective and is also of commercial interest, so we have therefore recently started a new company for the production of components for future quantum communication technology,” says Peter Lodahl, adding that the Innovation Fund investing so much in quantum technology is huge for research and technology development.

Developing new products, starting new companies and collaborating with industry are precisely what Innovation Fund is aiming to do with its investment.

From ordinary bits to qubits

Conventional computers are limited in their ability to solve very complex problems. The limitation lies in the fact that the calculations by standard computers are based on bits, consisting of either 0s or 1s.

In a quantum computer, data is comprised of quantum bits or qubits. Qubits are also a kind of 0s and 1s, but according to the laws of quantum properties that prevail on the atomic level, the states of 0 and 1 can be in superposition and exist simultaneously. This means that a quantum computer can perform extremely large amounts of data calculations and much faster than conventional computers. 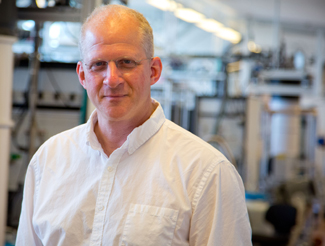 But the problem has been to find just the right particles for qubits as quantum states are fragile and the qubit easily becomes a regular bit as soon as it is measured. At the Niels Bohr Institute, the Center for Quantum Devices, QDev research group is working with the so-called Majorana particles that do not occur naturally, but can be created in certain materials.

“The quantum states of the Marjorana particles are protected in a fundamentally different way than ordinary quantum states. The protection lies in the particle existing simultaneously at both ends of special nanowires and in order to destroy its quantum state you need to interfere with both ends at the same time and that is quite unlikely. These special nanowires have been developed by the researchers in QDev at the Niels Bohr Institute and they are essential for new research breakthroughs,” says Charles Marcus, head of the Center for Quantum Devices (QDev) at the Niels Bohr Institute at the University of Copenhagen.

Charles Marcus is one of the world’s leading researchers in quantum electronics and the Center for Quantum Devices has begun collaborating with Microsoft in the development of future quantum computers. 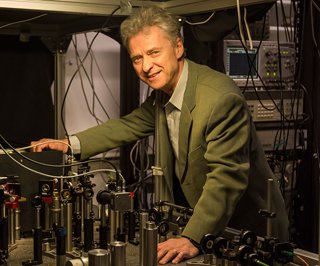 Also part of the collaboration at the Niels Bohr Institute is the research group, Quantop, led by Professor Eugene Polzik.

“We are working with several kinds of quantum technology. The area where we see an opportunity for business development is our research into ultra-sensitive measurement of radio waves using lasers. The method is called optomechanics, which is a complex interaction between mechanical motion and optical radiation. We have developed a detector that can measure radio waves at normal room temperature using laser light in a manner that prevents noise and therefore allows the precise measurement of even the weakest signals. Radio waves are part of many measurements and functions in, for example, communication with mobile phones, MRI scans, scientific experiments and cosmic observations,” explains Eugene Polzik, professor and head of Quantop.

This is a groundbreaking new method for measure the electrical signals that can have a significant impact on future technologies and Eugene Polzik sees great potential in the new sensitive method of measurement, both for equipment for medical treatment and for observations in space.

The group also has a project that deals with the development of small and extremely sensitive magnetic field sensors based on caesium gas in small glass containers.

“We have already demonstrated that our sensor can detect very small biological signals from the nervous system and with support from the Innovation Fund, we will continue to develop our magnetic field sensor into a more practical and compact sensor that can be used for various applications in biology and medicine, for the diagnosis of heart or eye disease, for example,” says Eugene Polzik.

Jan Thomsen is the head of the Ultracold Atoms, which carries out research on ultra-precise atomic clocks and precision measurements using quantum optics.
Units of measurement must be accurate, in terms of length, weight, amps etc. In Denmark, there is a metrology institute that keeps track of all of our units, also frequency units, for example, there is a ‘normal frequency’ for synchronising all major networks. But the use of fibre optic networks has increased tremendously and at the same time, frequency measurements are based on old technology.

“We are working to develop a new technology that uses compact molecular clocks to synchronise frequency norms in optical communication. For this we use acetylene molecules (welding gas), which has some optical transitions that are very accurate,” says Jan Thomsen, who is already in contact with a company to develop equipment for precision measurements.

The CEO for the new Center is Søren Isaksen. He previously served as the CTO of NKT Research Centre and is a member and chairmen of various research councils. In addition to leading the center, his job will be to reach out to Danish and foreign companies and, with the researchers, to help find out where there is potential for starting new businesses. The grant from the Innovation Fund will also mean the hiring of new employees with business and engineering backgrounds, as well as researchers.