There is incredible potential in quantum technology for unbreakable communication and new superfast computers and with a new technological invention quantum technology is storming ahead. Researchers in the research group Quantum Photonics at the Niels Bohr Institute have formed a new company, Sparrow Quantum, which will produce photonic chips that could be used for quantum technology based on light (photons) – that is, photonics instead of electronics (electrons). 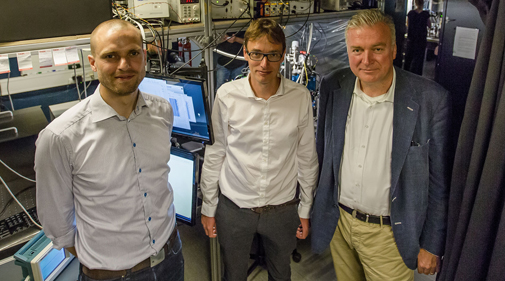 The photonic chips were developed by Professor Peter Lodahl and Associate Professor Søren Stobbe at the Niels Bohr Institute at the University of Copenhagen. They needed to be able to create a steady stream of photons that were emitted one at a time and in one direction.

Light usually spreads in all directions. But in order to develop quantum technologies based on light, you must be able to control the light all the way down to the individual photons.

The researchers have developed a kind of photon cannon, which is built into an optical chip. This optical chip consists of an extremely small photonic crystal, which is 10 microns wide (1 micron is a thousandth of a millimetre and is 160 nanometres thick (1 nanometre is a thousandth of a micron). Embedded inside the centre of the chip is a light source, which is a so-called quantum dot. They then shine laser light on the quantum dot, where there are atoms with electrons in orbits around the nucleus. The laser light excites the electrons, which then jump from one orbit to another, thus emitting a single photon at a time. Using a system of holes in the chip, they can control the direction of the photons.

The invention arose from a need for a light source for their research. They had no idea how well it would work - 10 percent? 90 percent? But the chip has gotten better and better. With persistent development of the technology, they can now control the emitted photons with nearly 100 percent accuracy.

“It has been a long and laborious process to reach such an extreme effectiveness and through more than 10 years of dedicated basic research, my group has achieved a complete understanding of the basic physics that determines how well it works. The high effectiveness is crucial to how well we can scale up the systems and generate many single photon light quanta. We potentially have an absolutely essential component for photonic quantum technology,” explains Peter Lodahl, professor in the Quantum Photonic research group.

This effective optical chip has aroused considerable interest among other researchers worldwide. “Can we just buy your chip,” they ask. And soon they will be able to.

They presented the idea at a networking event for Science Entrepreneurs and got great response. But you need money to start a business and how do you get it? And how do you make a business plan? Everything was considered.

The two researchers quickly realised that if the business was going to be successful, they would need to bring in professionals – people with a completely different way of thinking than theirs. Their knowledge about science needed to be supplemented with knowledge about business development.

From an idea to millions in investment

“The development of a reliable single photon source is a first step towards a future where photonic quantum technology could be used for quantum simulators, unbreakable codes or perhaps even a quantum internet. In the coming years, we hope to collaborate with other researchers to develop solutions based on photon technology – solutions which together can revolutionise the way we use information technology,” explains Søren Stobbe, associate professor in Quatnum Photonic and CEO of Sparrow Quantum.

Peter Lodahl and Søren Stobbe believe that their product has the potential to create a foundation for realising lightning fast quantum technology within five years.

Peter Lodahl, Professor, founder and co-owner of Sparrow Quantum and head of the Quantum Photonic research group at the University of Copenhagen. Tel: +45 2056-5303, lodahl@nbi.ku.dk