The Danish Mars researcher Jens Martin Knudsen has had an area on Mars named after him. The site has been named Knudsen Ridge and has a very beautiful location by Endeavour Crater near the equator. NASA wanted to honour the memory of Jens Martin Knudsen in celebration of the 12-year anniversary of the Mars Exploration Rover, Opportunity.

Knudsen Ridge is a ridge on the edge of the great Endeavour Crater, which is 25 km in diameter. The crater is located approximately 2 degrees of latitude south of the equator. Credits: NASA/JPL 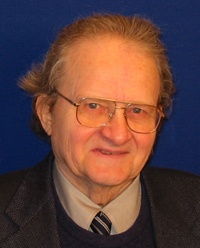 His involvement in Mars research went back to the 1970s when he lived in Brazil. He wondered why Mars’s reddish colour resembled the red Brazilian soil. Could the reddish dust on Mars possibly have been created just like on Earth, where the iron minerals in the soil had rusted due to thousands of years of degradation by water? – and could this tell us something about the existence and history of water on Mars? 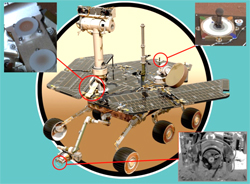 Illustration of placement of the Danish delivered magnets on the Mars Exploration Rovers, Spirit and Opportunity. Around the rendering of one of the rovers, at the top left the main science magnets: the capture and filter magnets are shown with a thin layer of dust on them; top right the color calibration target is seen and right next to it the small sweep magnet; and bottom right the four small RAT magnets can be seen as they are built into the Rock Abrasion Tool. Credit: NASA/JPL, Cornell University, Niels Bohr Institute, University of Copenhagen and Honeybee Robotics.

The Americans heard about his ideas and he was invited to prepare a proposal for NASA’s next mission.

“With his idea of an expanded magnet experiment, Jens Martin paved the way for Danish contributions to NASA’s Mars missions. The experiment was to collect magnetic dust particles on permanent magnets of different strengths and to study the patterns formed by the particles the magnets attracted using a camera. The weaker the magnets were the less red the dust was attracted by the magnets.  This is because in order for a dust particle to be attracted to a weak magnet, the particle has to contain a strongly magnetisable material,” explains Morten Bo Madsen, who had worked with Jens Martin Knudsen since the start of the Danish Mars research in the mid 1990s.

Jens Martin Knudsen was aware that the final answer to why the dust on Mars is magnetic would not be found without a Mössbauer spectrometer, so through a series of lectures at international conferences, he laid the groundwork for sending such an instrument to Mars. But was not realistic to raise the necessary funds in Denmark, so Jens Martin visited the group in Germany, where the best spectrometers were built and convinced this group of the importance developing the instrument for Mars missions. It was therefore Mainz University that supplied the Mössbauer spectrometers for Spirit and Opportunity.

: Images of dust captured on the main science magnets on Opportunity on Meridiani Planum, Mars. Images recorded during the mission since 2004 showed that these magnet experiments were very dynamic in the sense that both color and density of the dust layer varied considerably depending on wind gusts. Such gusts were able to remove less strongly magnetic dust particles and in this way enhance the concentration of more strongly magnetic particles in the thin dust layer. Credit: NASA/JPL, Cornell University, and Niels Bohr Institute, University of Copenhagen.

In 2003, NASA launched  'Mars Exploration Rovers' with the two robots Spirit and Opportunity, and a set of Danish-developed magnet instruments also went along. This time the science team wanted to study the dust using a microscope camera, an elemental analyser and a Mössbauer spectrometer.

“So with the help of German and American colleagues, Jens Martin succeeded in getting not just one, but two Mössbauer spectrometers to Mars and thus find the answer to the riddle of the origin of the dust’s magnetic properties. It was with the help of these instruments that we learned why the dust on Mars is magnetic. During the course of the mission, they observed the elements iron, titanium and chromium in the dust on the magnets, all of which are found in magnetic minerals, whereas elements like as sulphur and calcium varied greatly with time, because these elements were linked to the non-magnetic dust, which could be blown away by a strong wind. The results showed that the airborne dust on Mars is magnetic, because it contains the mineral magnetite. It was also results from Mössbauer instruments that unequivocally showed that there were minerals containing water in Gusev Crater and on Meridiani Planum on Mars,” explains Morten Bo Madsen. 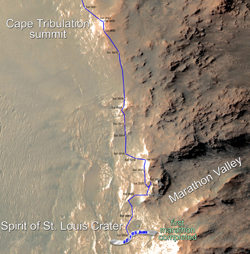 The several hundred kilometre great plain, Marathon Valley received its name because Opportunity completed its marathon of 42.2 km here. The journey took 11 years and 2 months. It is the farthest a rover has ever driven off the Earth. The previous record was of approximately 40 km, which is the distance the Russians drove the rover Lunokhod2 on the Moon. Credits: NASA/JPL

That the magnetic mineral was magnetite and not maghemite, was a completely new and surprising result. Maghemite is the oxidised form of the same mineral. The studies showed that the magnetic minerals are formed when the rocks on the surface of Mars are eroded by changes in temperature, winds and frost damage, while the minerals show very little influence of water during formation.

Jens Martin Knudsen retired in 2000 at the age of 70, but he remained active as long as he lived and Danish participation in Mars research has continued under the leadership of Morten Bo Madsen, The Mars Group at the Niels Bohr Institute at the University of Copenhagen.

Morten Bo Madsen, Associate Professor, Head of the Mars Group at the Niels Bohr Institute at the University of Copenhagen. +45 35 32 05 15, mbmadsen@nbi.ku.dk