In the search for truth, questioning accepted assumptions is the duty of any scientist. This necessity of investigating and reassessing our knowledge makes often way for newer, exciting hypotheses that continuously challenge the existing ones, as an integral part of the scientific progress. 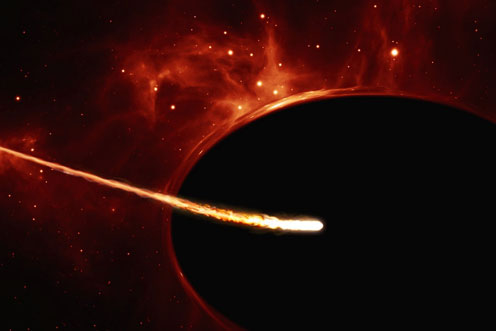 This artist’s impression depicts a Sun-like star close to a rapidly spinning supermassive black hole, with a mass of about 100 million times the mass of the Sun, in the centre of a distant galaxy. Its large mass bends the light from stars and gas behind it. Despite being way more massive than the star, the supermassive black hole has an event horizon which is only 200 times larger than the size of the star. Its fast rotation has changed its shape into an oblate sphere. Credit: ESO, ESA/Hubble, M. Kornmesser

The “crime scene” is located in a distant galaxy, 4 billion light years away from the Earth. An extraordinarily bright flash of light was witnessed by the All Sky Automated Survey for SuperNovae (ASAS-SN) in June 2015. This explosion, dubbed ASASSN-15lh, was so bright that it was at the time categorised as a “super luminous supernova”, a high mass star meeting death in a giant explosion, and indeed the brightest ever seen!

But given this extreme brightness, could this source be incurred by another event than a supernova? A question that Giorgos Leloudas, associate scientist at the Dark Cosmology Centre, Niels Bohr Institute, supported in part by the Carlsberg Foundation, and partially based at the Weizmann Institute of Science (Israel) did not hesitate to ask.

In collaboration with an international research team, Leloudas opened up for other explanations. A 10 month-long investigation followed, which gathered and analysed data from several ground-based and space telescopes.

Investigating this unique event, was in fact a tremendous collaborative effort, which involved using data, amongst others, from the Very Large Telescope at ESO’s Paranal Observatory, the New Technology Telescope at ESO’s La Silla Observatory, as part of the Public ESO Spectroscopic Survey of Transient Objects (PESSTO), and  the NASA/ASI/UK Swift satellite.

The team used the data to propose a theoretical model and explanation for this extraordinary event and this led to a new and exciting hypothesis: the discovery of a rare phenomenon, called a tidal disruption event, where a rapidly spinning gigantic black hole is ripping apart an unlucky star that came too close.

“We observed the source for 10 months following the event and have concluded that the explanation is unlikely to lie with an extraordinarily bright supernova. Our results indicate that the event was probably caused by a supermassive black hole, located in the centre of its galaxy, that destroyed a low-mass star,” explains Leloudas. He explains that important evidence towards this direction was provided by the fact that the event took place in the nucleus of a red and dead massive galaxy. Massive stars that explode as supernovae are not found in these old environments.

Ultraviolet data from the Swift spacecraft also revealed a new emission episode long after the initial explosion. “A supernova is not expected to show this kind of revived emission, while leftover debris from the shredded star can naturally emit long-lasting light when they fall down the black hole”, explains Daniele Malesani, another team member from the Dark Cosmology Centre and the Danish Technical University.

Although the team say a supernova source is therefore very unlikely, the complexity of the observed emission demonstrates that tidal disruption events exhibit more variety and a more complex phenomenology than previously known. Team member Nicholas Stone from Columbia University, USA, elaborates: “The tidal disruption event we propose cannot be explained with a ordinary supermassive black hole. The black hole has to be spinning rapidly in order to allow for the disruption to happen outside its event horizon.”

Leloudas concludes: “We cannot say to 100% certainty that the ASASSN-15lh event was a tidal disruption event. But it is by far the most likely explanation.”

Note: This research was presented in a paper entitled “The Superluminous Transient ASASSN-15lh as a Tidal Disruption Event from a Kerr Black Hole”, by G. Leloudas et al. to appear in the new Nature Astronomy magazine. Link to the Nature Astronomy article