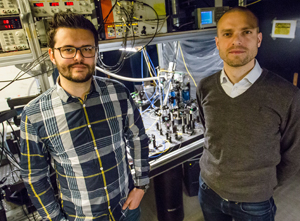 Researchers at the Niels Bohr Institute are working with quantum dots, which are a kind of artificial atom that can be incorporated into optical chips. In a quantum dot, an electron can be excited (i.e. jump up), for example, by shining a light on it with a laser and the electron leaves a ‘hole’. The stronger the interaction between light and matter, the faster the electron decays back into the hole and the faster the light is emitted. 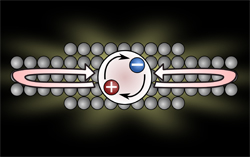 Demonstrating this effect has been challinging so far because the atoms either come so close together that they bump into each other or they are so far apart that the quantum speed up does not work. Researchers at the Niels Bohr Institute have now finally demonstrated the effect experimentally, but in an entirely different physical system than Dicke had in mind. They have shown this so-called superradiance for photons emitted from a single quantum dot.

“We have developed a quantum dot so that it behaves as if it was comprised of five quantum dots, which means that the light is five times stronger. This is due to the attraction between the electron and the hole. But what is special is that the quantum dot still only emits a single photon at a time. It is an outstanding single-photon source,” says Søren Stobbe, who is an associate professor in the Quantum Photonic research group at the Niels Bohr Institute at the University of Copenhagen and led the project. The experiment was carried out in collaboration with Professor David Ritchie’s research group at the University of Cambridge, who have made the quantum dots.

Petru Tighineanu, a postdoc in the Quantum Photonics research group at the Niels Bohr Institute, has carried out the experiments and he explains the effect as such, that the atoms are very small and light is very ‘big’ because of its long wavelength, so the light almost cannot ‘see’ the atoms – like a lorry that is driving on a road and does not notice a small pebble. But if many pebbles become a larger stone, the lorry will be able to register it and then the interaction becomes much more dramatic. In the same way, light interacts much more strongly with the quantum dot if the quantum dot contains the special superradiant quantum state, which makes it look much bigger. 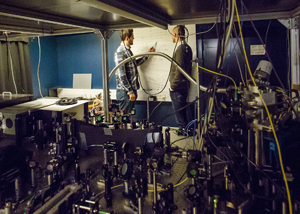 The experiments were carried out in the group’s laboratories on Blegdamsvej in Copenhagen.

“The increased light-matter interaction makes the quantum dots more robust in regards to the disturbances that are found in all materials, for example, acoustic oscillations. It helps to make the photons more uniform and is important for how large you can build future quantum computers,” says Søren Stobbe.

He adds that it is actually the temperature, which is only a few degrees above absolute zero, that limits how fast the light emissions can remain in their current experiments. In the long term, they will study the quantum dots at even lower temperatures, where the effects could be very dramatic.